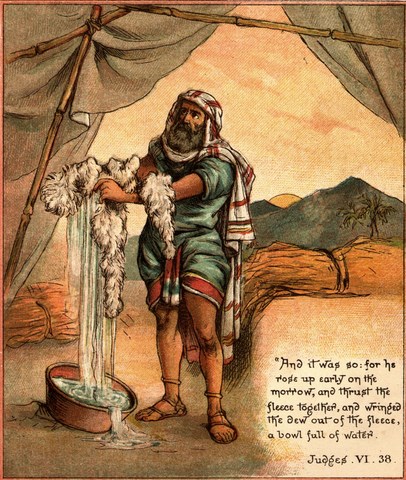 Judges 6:16The Lord said to him, “I will be with you. And you will destroy the Midianites as if you were fighting against one man.” 17  Gideon replied, “If you are truly going to help me, show me a sign to prove that it is really the Lord speaking to me.

This passage of the Bible talks about the famous Sign of the Flees. Gideon wanted a confirmation that the message indeed came from God and he asked for signs.

When we pray to God to ask Him for directions, how do we know whether a message is indeed from God or not? How do we confirm?

We noted that there are several ways God can speak to us. One way is through the Bible, which is the most clear cut. God can also speak to us through other ways such as prompting of the Holy Spirit, through friends, situations, etc.

For the means that are not so clear-cut, how do we know that the word was indeed from God? We are faced with the same situation that Gideon faced and we can learn about asking for confirmation.

Should we ask for confirmation at all?

But some things are not so clear cut. Should we evangelize to the neighborhood in this particular way? There is no need for confirmation if God has already confirmed His word through visions and prompting of the Holy Spirit with the church leaders.

In the case of Gideon, there is probably no need to ask for confirmation. He seems to have known that his requests might displease God (6:39), and yet he demanded two miracles (6:37, 39), even after witnessing the miraculous fire from the rock (6:21).

Asking for further proof is an indication that he had no faith in God. He wanted to be overly sure that it was God speaking to him. Asking for confirmation is sometimes an excuse not to be doing something.

Judges 6:36  Then Gideon said to God, “If you are truly going to use me to rescue Israel as you promised, 37  prove it to me in this way. I will put some wool on the threshing floor tonight. If the fleece is wet with dew in the morning but the ground is dry, then I will know that you are going to help me rescue Israel as you promised.” 38And it happened just that way. When Gideon got up the next morning, he squeezed the fleece and wrung out a whole bowlful of water.

We should not force God to perform absurd tasks to convince us of His word. For example, if we want to know whether it is God’s will for us to go to a particular college, do we ask God to show us His will by bringing rain to our city for the next few days. Why, both things are not related!

Asking God for a miracle

There are times when we can ask God for miracles to confirm His word if we have not received any confirmation yet. Miracles have an important place in God’s work. Jesus did a lot of miracles so that the people would be convinced that He was from God.

Judges 6:36  Then Gideon said to God, “If you are truly going to use me to rescue Israel as you promised, 37  prove it to me in this way. I will put some wool on the threshing floor tonight. If the fleece is wet with dew in the morning but the ground is dry, then I will know that you are going to help me rescue Israel as you promised.” 38And it happened just that way. When Gideon got up the next morning, he squeezed the fleece and wrung out a whole bowlful of water. 39  Then Gideon said to God, “Please don’t be angry with me, but let me make one more request. This time let the fleece remain dry while the ground around it is wet with dew.” 40So that night God did as Gideon asked. The fleece was dry in the morning, but the ground was covered with dew.

After seeing the miracle of the wet fleece, why did Gideon ask for another miracle? Perhaps he thought the results of the first test could have happened naturally. A thick fleece could retain moisture long after the sun had dried the surrounding ground.

At times in our life, our faith in God may hit rock bottom. We can also do what Gideon did to ask God to prove Himself real to us.

Judges 6:14  Then the Lord turned to him and said, “Go with the strength you have and rescue Israel from the Midianites. I am sending you!” 15″But Lord,” Gideon replied, “how can I rescue Israel? My clan is the weakest in the whole tribe of Manasseh, and I am the least in my entire family!” 16The Lord said to him, “I will be with you. And you will destroy the Midianites as if you were fighting against one man.”

Gideon could hardly believe his ears when God called him a “mighty hero” in verse 12 and then to rescue Israel from the powerful Midianites. He was rightfully shocked for he was someone of low standing in the community. Couldn’t God have chosen someone more capable? He therefore asked God to confirm that what He said was indeed not a mistake by elaborating further. God explained that it could be done because God’s presence would be with him.

God may be calling you to do something which you think is impossible given the facts of the situation. Ask God to confirm His word by explaining to you how that can be possible.

God confirms His word through others

Judges 7:9  During the night, the Lord said, “Get up! Go down into the Midianite camp, for I have given you victory over them! 10  But if you are afraid to attack, go down to the camp with your servant Purah. 11Listen to what the Midianites are saying, and you will be greatly encouraged. Then you will be eager to attack.” So Gideon took Purah and went down to the outposts of the enemy camp. 12  The armies of Midian, Amalek, and the people of the east had settled in the valley like a swarm of locusts. Their camels were like grains of sand on the seashore—too many to count! 13  Gideon crept up just as a man was telling his friend about a dream. The man said, “I had this dream, and in my dream a loaf of barley bread came tumbling down into the Midianite camp. It hit a tent, turned it over, and knocked it flat!” 14His friend said, “Your dream can mean only one thing—God has given Gideon son of Joash, the Israelite, victory over all the armies united with Midian!” 15When Gideon heard the dream and its interpretation, he thanked God. Then he returned to the Israelite camp and shouted, “Get up! For the Lord has given you victory over the Midianites!”

If we want to confirm what God is saying to us, we can ask Him to do so using other people. Very often, within the church, someone would hear from God and this is later confirmed by other church members. God knows our faith is weak, just like He knows Gideon’s faith was weak (v 10). That is why He sends other people to confirm His word to us.