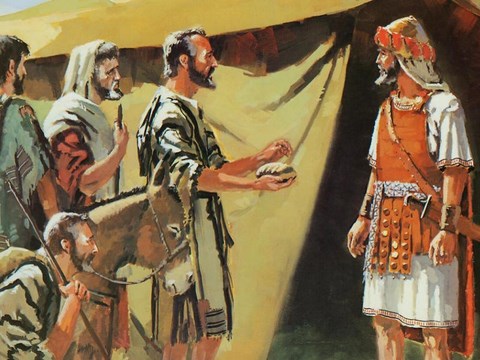 As the news about the Israelites’ victory became widespread, the Israelites experienced opposition from the surrounding nations. One nation, the Gibeonites, decided that they could not fight Israel and resorted to deception.

Joshua 9:1 Now all the kings west of the Jordan heard about what had happened. (These were the kings of the Hittites, Amorites, Canaanites, Perizzites, Hivites, and Jebusites, who lived in the hill country, in the western foothills, and along the coast of the Mediterranean Sea as far north as the Lebanon mountains.) 2These kings quickly combined their armies to fight against Joshua and the Israelites. 3But when the people of Gibeon heard what had happened to Jericho and Ai, 4they resorted to deception to save themselves. They sent ambassadors to Joshua, loading their donkeys with weathered saddlebags and old patched wineskins. 5They put on ragged clothes and worn-out, patched sandals. And they took along dry, moldy bread for provisions. 6When they arrived at the camp of Israel at Gilgal, they told Joshua and the men of Israel, “We have come from a distant land to ask you to make a peace treaty with us.”

This story is a good example of how we should not make decisions. The Bible is very useful for our life because it not just portrays the good side of the Bible heroes but it also tells us their mistakes so we can avoid the same pitfalls. Here we see how Joshua and the Israelites made the wrong decision to have a peace treaty with the Gibeonites and the reasons why he made that wrong decision.

They looked to the outside

Joshua 9:12″This bread was hot from the ovens when we left. But now, as you can see, it is dry and moldy. 13These wineskins were new when we filled them, but now they are old and cracked. And our clothing and sandals are worn out from our long, hard trip.” 14 So the Israelite leaders examined their bread…

The Israelites looked to outward evidence and concluded that the men must have come from a distant country. The Bible tells us of Samuel who also made the wrong decision when he had to choose the successor of King Saul.

1 Samuel 16:1 Finally, the Lord said to Samuel, “You have mourned long enough for Saul. I have rejected him as king of Israel. Now fill your horn with olive oil and go to Bethlehem. Find a man named Jesse who lives there, for I have selected one of his sons to be my new king.”… 6 When they arrived, Samuel took one look at Eliab and thought, “Surely this is the Lord’s anointed!” 7 But the Lord said to Samuel, “Don’t judge by his appearance or height, for I have rejected him. The Lord doesn’t make decisions the way you do! People judge by outward appearance, but the Lord looks at a person’s thoughts and intentions.”

They failed to substantiate the facts

Joshua 9:16Three days later, the facts came out-these people of Gibeon lived nearby! 17The Israelites set out at once to investigate and reached their towns in three days. The names of these towns were Gibeon, Kephirah, Beeroth, and Kiriath-jearim. 18But the Israelites did not attack the towns, for their leaders had made a vow to the LORD, the God of Israel.

The Israelites found out the truth later by making investigations. But they found out too late. If only they had taken the time to substantiate the facts BEFORE they made the decision.

Let’s not be hasty in making decisions and consider all the facts. Writing down all the pros and cons is usually a good way.

They failed to consult God

Joshua 9:14 So the Israelite leaders examined their bread, but they did not consult the Lord.

Joshua thought that he could handle the matter on his own. That is why he did not consult God. He had forgotten that the times of victory he had in the past was because he consulted God.

This does not mean that we need to consult God for every little thing like what to eat, what to wear, etc. But forging ties with another nation is clearly an important issue and one which Joshua failed to consult God.

The next time you have to make an important decision, remember to consult God first and ask Him for wisdom. God promises to give wisdom to whoever asks Him.

James 1:5 If you need wisdom-if you want to know what God wants you to do-ask him, and he will gladly tell you. He will not resent your asking.

They succumbed to flattery

Joshua 9:9 They answered, “We are from a very distant country. We have heard of the might of the LORD your God and of all he did in Egypt. 10 We have also heard what he did to the two Amorite kings east of the Jordan River-King Sihon of Heshbon and King Og of Bashan (who lived in Ashtaroth). 11So our leaders and our people instructed us, ‘Prepare for a long journey. Go meet with the people of Israel and declare our people to be their servants, and ask for peace.’

I am not surprised if the Israelites made their decision hastily because they were overcome by flattery. When someone flatters us, we tend to not want to spoil it by agreeing with them.

They followed the leader blindly

Joshua 9:15Then Joshua went ahead and signed a peace treaty with them, and the leaders of Israel ratified their agreement with a binding oath.

The Israelites were so keen to follow their leader, Joshua, that when he signed the agreement, they ratified it before cross checking the facts. The next verse tells us that only three days later, they discovered that they have decided wrongly.

It is true God has placed leaders to guide us. But in times of important decisions, we must not follow the leader blindly. It is all right to ask God to show us whether the leader is deciding correctly or to find out more information for ourselves.

They remembered what God had to say

Joshua 9:7 The Israelites replied to these Hivites, “How do we know you don’t live nearby? For if you do, we cannot make a treaty with you.”

Here the Israelites did well. They considered what God had to say about a particular thing before they made that decision. Although they thought wrongly that the men lived in a faraway place, they would not have agreed to sign a treaty with them if they had knew.

It is always the first step in making decisions to check whether it is against God’s laws. In recent years, there had been debates as to whether gays should be allowed to serve as Church ministers. If one were to go to God’s laws, the decision becomes immediately apparent. The Bible is there for us so as to make many decisions clear-cut.

Do you have to make an important decision? What does the Word of God have to say about this?