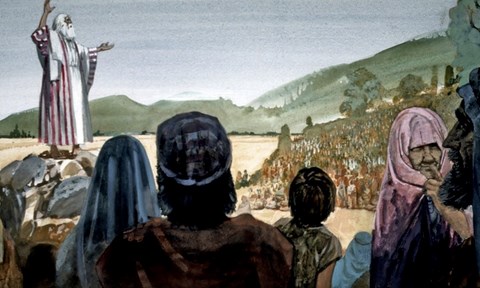 The whole of chapter 12 consists of names of kings who have been conquered by Joshua. For example…

(Josh 12:1-3 NIV)  These are the kings of the land whom the Israelites had defeated and whose territory they took over east of the Jordan, from the Arnon Gorge to Mount Hermon, including all the eastern side of the Arabah: {2} Sihon king of the Amorites, who reigned in Heshbon. He ruled from Aroer on the rim of the Arnon Gorge–from the middle of the gorge–to the Jabbok River, which is the border of the Ammonites. This included half of Gilead. {3} He also ruled over the eastern Arabah from the Sea of Kinnereth to the Sea of the Arabah (the Salt Sea ), to Beth Jeshimoth, and then southward below the slopes of Pisgah.

The next 9 chapters deal primarily with the division of the land after they have conquered it. For example…

(Josh 13:8-12 NIV)  The other half of Manasseh, the Reubenites and the Gadites had received the inheritance that Moses had given them east of the Jordan, as he, the servant of the LORD, had assigned it to them. {9} It extended from Aroer on the rim of the Arnon Gorge, and from the town in the middle of the gorge, and included the whole plateau of Medeba as far as Dibon, {10} and all the towns of Sihon king of the Amorites, who ruled in Heshbon, out to the border of the Ammonites. {11} It also included Gilead, the territory of the people of Geshur and Maacah, all of Mount Hermon and all Bashan as far as Salecah– {12} that is, the whole kingdom of Og in Bashan, who had reigned in Ashtaroth and Edrei and had survived as one of the last of the Rephaites. Moses had defeated them and taken over their land.

What can we learn from these boring chapters?

Remember your victories in God

(Num 21:33-34 NIV)  Then they turned and went up along the road toward Bashan, and Og king of Bashan and his whole army marched out to meet them in battle at Edrei. {34} The LORD said to Moses, “Do not be afraid of him, for I have handed him over to you, with his whole army and his land. Do to him what you did to Sihon king of the Amorites, who reigned in Heshbon.”

We need to remember our victories in God. Those victories will give us the confidence to move forward in life. The God who had given us the victory then will continue to give us victories in life. Our God does not change.

Even giants are no match for God

Og seems to be a remarkable monarch. The Bible tells us that he was a remnant of the giants.

(Josh 12:4 KJV)  And the coast of Og king of Bashan, which was of the remnant of the giants, that dwelt at Ashtaroth and at Edrei,

Moses even told us the size of his bedstead.

(Deu 3:11 KJV)  For only Og king of Bashan remained of the remnant of giants; behold, his bedstead was a bedstead of iron; is it not in Rabbath of the children of Ammon? nine cubits was the length thereof, and four cubits the breadth of it, after the cubit of a man.

Despite his stature, he was no match for God. When you are facing giant battles in life, remember that even Og fell.

That was the reason why Caleb had so much confidence in God. He saw how the giants fell. Later when it was time for him to receive his allotment of land, he asked for a “difficult” piece of land. He was confident that even this giant would fall.

(Josh 14:12 NIV)  Now give me this hill country that the LORD promised me that day. You yourself heard then that the Anakites were there and their cities were large and fortified, but, the LORD helping me, I will drive them out just as he said.”

God’s promises are yea and amen

In Joshua 13, we know that much of the land still remains unconquered, and the leader Joshua who is given the task to do it is very old, yet God is already talking about how the land is to be divided! To God, it is already a done deal.

(Josh 13:1-7 NIV)  When Joshua was old and well advanced in years, the LORD said to him, “You are very old, and there are still very large areas of land to be taken over. {6} “As for all the inhabitants of the mountain regions from Lebanon to Misrephoth Maim, that is, all the Sidonians, I myself will drive them out before the Israelites. Be sure to allocate this land to Israel for an inheritance, as I have instructed you, {7} and divide it as an inheritance among the nine tribes and half of the tribe of Manasseh.”

God has absolute confidence in His own promises. Do we have the same confidence in God’s promises? Are there any promises that you would like to claim?

God’s will is confirmed through various sources

Through Jacob’s original blessing of his sons (Genesis 49) and Moses’ blessing of the 12 tribes (Deuteronomy 33), the type of land each tribe would receive was already known. The two blessings were prophetic, for although Joshua cast lots to determine the land to be given to each of the remaining tribes, the allotments came out just as Jacob and Moses had predicted. (Source: Life Application Bible)

God’s will for us is often confirmed through various sources. For example, we may read the Bible and sense that God wants us to do something. Then we get confirmation through another Christian who sense the same thing.

Are there any directions in your life that you know God is taking you to that has been confirmed by a few sources? If so, we need to take them seriously. We will not be happy running away from God’s will.