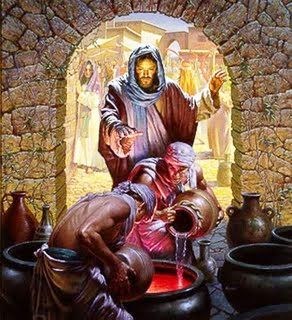 (John 2:1-10 NIV)  On the third day a wedding took place at Cana in Galilee. Jesus’ mother was there, {2} and Jesus and his disciples had also been invited to the wedding. {3} When the wine was gone, Jesus’ mother said to him, “They have no more wine.” {4} “Dear woman, why do you involve me?” Jesus replied. “My time has not yet come.” {5} His mother said to the servants, “Do whatever he tells you.” {6} Nearby stood six stone water jars, the kind used by the Jews for ceremonial washing, each holding from twenty to thirty gallons. {7} Jesus said to the servants, “Fill the jars with water”; so they filled them to the brim. {8} Then he told them, “Now draw some out and take it to the master of the banquet.” They did so, {9} and the master of the banquet tasted the water that had been turned into wine. He did not realize where it had come from, though the servants who had drawn the water knew. Then he called the bridegroom aside {10} and said, “Everyone brings out the choice wine first and then the cheaper wine after the guests have had too much to drink; but you have saved the best till now.”

Christ began to work miracles in Cana, an obscure corner of the country, remote from Jerusalem, which was the public scene of action, to show that He sought not honour from men (John 5:41), but would put honour upon the lowly. Are you thinking that you are too insignificant for God to do a miracle in your life? You are not. God is as much interested in doing a miracle in Cana as He would be in Jerusalem.

Up to this point Jesus had not done any miracles yet. But He already had His disciples with Him. There are men who would follow Jesus and obey Him even though they have not seen a single miracle. Are we like them? Do we follow God only after we see miracles with our eyes or are we drawn to His character?

Observe the honour that Christ put upon the ordinance of marriage, that He graced it, not only with his presence, but also with His first miracle. We should attribute the same importance to marriage as Christ did. Marriage is not a temporary trial-and-error arrangement between two people. It is not a legal contract with a termination clause. We need to view marriage as a permanent covenant between God and man.

Jesus took a simple object – water – and turned it into the best wine. This is what Jesus can do for our lives if we let Him. He could turn our lives from being mundane and insignificant to one that has great value.

Jesus was on a mission to save the world, the greatest mission in the history of humankind. Yet he took time to attend a wedding and take part in its festivities. We may be tempted to think we should not take time out from our “important” work for social occasions. But maybe these social occasions are part of our mission. Jesus valued these wedding festivities because they involved people, and Jesus came to be with people. Our mission can often be accomplished in joyous times of celebration with others. Bring balance to your life by bringing Jesus into times of pleasure as well as times of work. (Source: Life Application Bible)

It is easy to think that God would do a miracle in our life when we are sick or in deep financial difficulties. But would God do a miracle just to make us look good or help us to avoid embarrassment. In the days of Jesus, hospitality was a key issue and the host would suffer embarrassment if he ran out of wine during a festival. Jesus responded to that need because all our needs are important to him. He response to our physical needs, emotional needs, even esteem needs. He created us and He knows that these needs are genuine. Are you afraid to ask God for a miracle because you think your needs are not important to God? No need is too trivial in the eyes of God.

Jesus asked His mother why she was involving Him in this situation since His time had not yet come for Him to display His miracles. There is a certain timing to all of God’s work, including miracles.

(John 7:30 NIV)  At this they tried to seize him, but no one laid a hand on him, because his time had not yet come.

(John 8:20 NIV)  He spoke these words while teaching in the temple area near the place where the offerings were put. Yet no one seized him, because his time had not yet come.

We may think that God is slow to act in our situation but He is merely acting on His timetable.

Even though it was not Jesus’ time to start His miracles, He responded to His mother’s request because He cares for our needs. He does not want the groom to be embarrassed by running out of wine. This is what we call the permissive will of God. Even though something may not be His original intention, He permits it to happen as it does not contravene His will and because we ask Him to.

Mary asked the servants to do whatever Jesus says. She submitted to Jesus’ way of doing things. When we bring our problems to Christ, we may think we know how He should take care of them. But He may have a completely different plan. Like Mary, we should submit and allow Him to deal with the problem as He sees best.

Indeed the miracle that Christ did was in a way that was not within natural expectations. It was done in water-pots. These water-pots were intended for the legal purifications from ceremonial pollutions enjoined by the law of God, and many more by the tradition of the elders. The Jews eat not, except they wash often (Mark 7:3). To what use Christ put them, quite different from what they were intended for; to be the receptacles of the miraculous wine. God may do a miracle in our life through means that are totally not within our expectations. Be open to God’s leading and to working in us through any circumstance.

The miracle that Jesus did at Cana involved human intervention as in many of Jesus’ miracles. Jesus did not make wine materialize from thin air but involved obedience on the part of the servants. Likewise when God does a miracle in our life, it does not mean that we step back and do nothing. We must do everything God requires us to do in the process to start the process of the miracle.

The wine that Jesus created was the best type of wine. It was better that the wine that the groom had. When we rely on God to work in our situation, He brings out the best results, better than what we could have done ourselves. And He could do it in an instant. Jesus did not need to let the wine go through the slow fermentation and ageing process. He created good wine instantly. Do not think that God is slow in fulfilling His promise to you. When the timing comes, He could do everything in an instant.