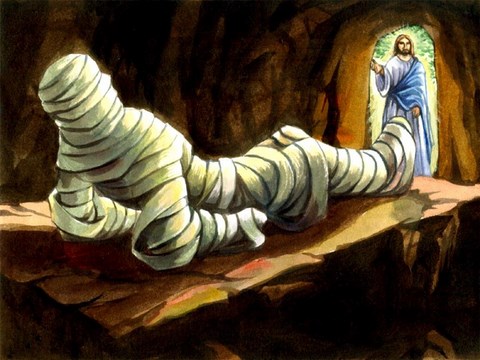 (John 11:1-45 NIV)  Now a man named Lazarus was sick. He was from Bethany, the village of Mary and her sister Martha. {2} This Mary, whose brother Lazarus now lay sick, was the same one who poured perfume on the Lord and wiped his feet with her hair. {3} So the sisters sent word to Jesus, “Lord, the one you love is sick.” {4} When he heard this, Jesus said, “This sickness will not end in death. No, it is for God’s glory so that God’s Son may be glorified through it.” {5} Jesus loved Martha and her sister and Lazarus. {6} Yet when he heard that Lazarus was sick, he stayed where he was two more days. {7} Then he said to his disciples, “Let us go back to Judea.” {8} “But Rabbi,” they said, “a short while ago the Jews tried to stone you, and yet you are going back there?” {9} Jesus answered, “Are there not twelve hours of daylight? A man who walks by day will not stumble, for he sees by this world’s light. {10} It is when he walks by night that he stumbles, for he has no light.” {11} After he had said this, he went on to tell them, “Our friend Lazarus has fallen asleep; but I am going there to wake him up.” {12} His disciples replied, “Lord, if he sleeps, he will get better.” {13} Jesus had been speaking of his death, but his disciples thought he meant natural sleep. {14} So then he told them plainly, “Lazarus is dead, {15} and for your sake I am glad I was not there, so that you may believe. But let us go to him.” {16} Then Thomas (called Didymus) said to the rest of the disciples, “Let us also go, that we may die with him.” {17} On his arrival, Jesus found that Lazarus had already been in the tomb for four days. {18} Bethany was less than two miles from Jerusalem, {19} and many Jews had come to Martha and Mary to comfort them in the loss of their brother. {20} When Martha heard that Jesus was coming, she went out to meet him, but Mary stayed at home. {21} “Lord,” Martha said to Jesus, “if you had been here, my brother would not have died. {22} But I know that even now God will give you whatever you ask.” {23} Jesus said to her, “Your brother will rise again.” {24} Martha answered, “I know he will rise again in the resurrection at the last day.” {25} Jesus said to her, “I am the resurrection and the life. He who believes in me will live, even though he dies; {26} and whoever lives and believes in me will never die. Do you believe this?” {27} “Yes, Lord,” she told him, “I believe that you are the Christ, the Son of God, who was to come into the world.” {28} And after she had said this, she went back and called her sister Mary aside. “The Teacher is here,” she said, “and is asking for you.” {29} When Mary heard this, she got up quickly and went to him. {30} Now Jesus had not yet entered the village, but was still at the place where Martha had met him. {31} When the Jews who had been with Mary in the house, comforting her, noticed how quickly she got up and went out, they followed her, supposing she was going to the tomb to mourn there. {32} When Mary reached the place where Jesus was and saw him, she fell at his feet and said, “Lord, if you had been here, my brother would not have died.” {33} When Jesus saw her weeping, and the Jews who had come along with her also weeping, he was deeply moved in spirit and troubled. {34} “Where have you laid him?” he asked. “Come and see, Lord,” they replied. {35} Jesus wept. {36} Then the Jews said, “See how he loved him!” {37} But some of them said, “Could not he who opened the eyes of the blind man have kept this man from dying?” {38} Jesus, once more deeply moved, came to the tomb. It was a cave with a stone laid across the entrance. {39} “Take away the stone,” he said. “But, Lord,” said Martha, the sister of the dead man, “by this time there is a bad odor, for he has been there four days.” {40} Then Jesus said, “Did I not tell you that if you believed, you would see the glory of God?” {41} So they took away the stone. Then Jesus looked up and said, “Father, I thank you that you have heard me. {42} I knew that you always hear me, but I said this for the benefit of the people standing here, that they may believe that you sent me.” {43} When he had said this, Jesus called in a loud voice, “Lazarus, come out!” {44} The dead man came out, his hands and feet wrapped with strips of linen, and a cloth around his face. Jesus said to them, “Take off the grave clothes and let him go.” {45} Therefore many of the Jews who had come to visit Mary, and had seen what Jesus did, put their faith in him.

Any trial a believer faces can ultimately bring glory to God because God can bring good out of any bad situation (Genesis 50:20; Romans 8:28). When trouble comes, do you grumble, complain, and blame God, or do you see your problems as opportunities to honor him? (Source: Life Application Bible)

When Lazarus was ill, his sisters sent word to Jesus, “Lord, the one you love is sick.” This is a simple statement of problem to Jesus without asking Him to do exactly what they want. If Jesus wanted to heal their brothers, so be it. If Jesus wanted to let their brothers die then raise him from the dead, that is fine as well. Martha would later say to Jesus, “if you had been here, my brother would not have died. But I know that even now God will give you whatever you ask.” When we ask God for a miracle, let Him do whatever He sees fit in our situation.

(Psa 23:4 NIV)  Even though I walk through the valley of the shadow of death, I will fear no evil, for you are with me; your rod and your staff, they comfort me.

We are going to walk through the valley of death, not remain in it.

“It is for God’s glory so that God’s Son may be glorified through it.” The death of Lazarus is for the glory of God, that an opportunity may be given for the manifesting of God’s glorious power. The afflictions of the saints are designed for the glory of God, that He may have the opportunity of showing them favour and working out the situation for good. As, before, the man was born blind that Christ might have honour by healing him (John 9:3), so Lazarus must be sick and die, that Christ may be glorified as the Lord of life.

Jesus loved this family and often stayed with them. He knew their pain but did not respond immediately. If Jesus had been with Lazarus during the final moments of Lazarus’s sickness, he might have healed him rather than let him die. But Lazarus died so that Jesus’ power over death could be shown to his disciples and others. His delay had a specific purpose. God’s timing, especially his delays, may make us think he is not answering or is not answering the way we want. (Source: Life Application Bible)

(John 11:45 NIV)  Therefore many of the Jews who had come to visit Mary, and had seen what Jesus did, put their faith in him.

Mary, Martha and Lazarus suffered. But the end result is that more people believed because the impact of raising someone from the dead is greater than the impact of healing someone who is ill. When we suffer and wait for a miracle that did not come quickly, it may be because God wants to do a greater work in the situation.

Another reason why Jesus has waited may be to test Mary and Martha’s extent of faith. It is much easier to believe that Jesus can heal than believe that Jesus can raise someone from the dead. When the situation gets worse and worse, do we continue to believe that our God is more powerful than the worse of circumstances? Martha passed the test extremely well because she believed that even with Lazarus dead, it was not too late. “if you had been here, my brother would not have died. But I know that even now God will give you whatever you ask.”

Jesus wept when He saw the grave of Lazarus. His miracle of raising Lazarus from the dead proceeded out of His love for him. When we ask God for a miracle, we are asking a God that cares for us. He wants the best for our life.