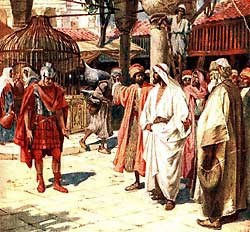 (Mat 8:5-13 NIV)  When Jesus had entered Capernaum, a centurion came to him, asking for help. {6} “Lord,” he said, “my servant lies at home paralyzed and in terrible suffering.” {7} Jesus said to him, “I will go and heal him.” {8} The centurion replied, “Lord, I do not deserve to have you come under my roof. But just say the word, and my servant will be healed. {9} For I myself am a man under authority, with soldiers under me. I tell this one, ‘Go,’ and he goes; and that one, ‘Come,’ and he comes. I say to my servant, ‘Do this,’ and he does it.” {10} When Jesus heard this, he was astonished and said to those following him, “I tell you the truth, I have not found anyone in Israel with such great faith. {11} I say to you that many will come from the east and the west, and will take their places at the feast with Abraham, Isaac and Jacob in the kingdom of heaven. {12} But the subjects of the kingdom will be thrown outside, into the darkness, where there will be weeping and gnashing of teeth.” {13} Then Jesus said to the centurion, “Go! It will be done just as you believed it would.” And his servant was healed at that very hour.

Verse 7 tells us that Jesus is eager and willing to do a miracle in our life. Why is it that sometimes we ask for a miracle for our situation but God seems so slow to reply?

One reason is that He wants to test us to see if we would continue to trust in Him despite the delay. Abraham was one person who was promised many descendants for many times. Yet he waited so many years to even have one son. Throughout this time, his faith wavered but he still basically trusted God to deliver His promise.

Another reason is to see if we would yield to His will. When we ask for something, we want it immediately. We basically want God to do our will instead of seeking God’s will. When God delays, it teaches us to submit to His timing and not to our own timing. Sometimes God does a work in our inner being and is moulding our character before He does that outward miracle.

(2 Ki 5:9-11 NIV)  So Naaman went with his horses and chariots and stopped at the door of Elisha’s house. {10} Elisha sent a messenger to say to him, “Go, wash yourself seven times in the Jordan, and your flesh will be restored and you will be cleansed.” {11} But Naaman went away angry and said, “I thought that he would surely come out to me and stand and call on the name of the LORD his God, wave his hand over the spot and cure me of my leprosy.

The verse further shows that the Roman Officer believes that Jesus’ words alone would suffice. Contrast this to the woman who wanted Jesus to put His hands upon her so that she can be healed.

(Mat 9:18 NIV)  While he was saying this, a ruler came and knelt before him and said, “My daughter has just died. But come and put your hand on her, and she will live.”

We are often willing to trust God only if He works in a certain way that we expect. But all we need is actually His words. When He says something, it will surely come to pass.