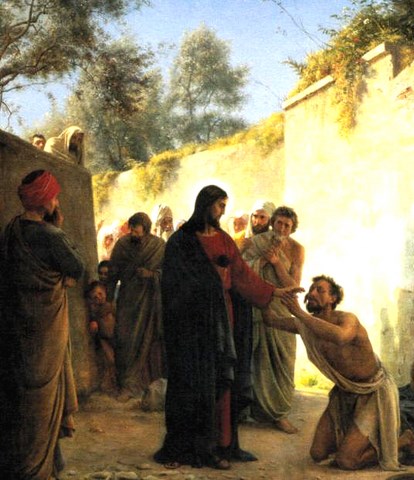 (Mark 10:46-52 NIV)  Then they came to Jericho. As Jesus and his disciples, together with a large crowd, were leaving the city, a blind man, Bartimaeus (that is, the Son of Timaeus), was sitting by the roadside begging. {47} When he heard that it was Jesus of Nazareth, he began to shout, “Jesus, Son of David, have mercy on me!” {48} Many rebuked him and told him to be quiet, but he shouted all the more, “Son of David, have mercy on me!” {49} Jesus stopped and said, “Call him.” So they called to the blind man, “Cheer up! On your feet! He’s calling you.” {50} Throwing his cloak aside, he jumped to his feet and came to Jesus. {51} “What do you want me to do for you?” Jesus asked him. The blind man said, “Rabbi, I want to see.” {52} “Go,” said Jesus, “your faith has healed you.” Immediately he received his sight and followed Jesus along the road.

Verses 47 and 48 tells us that this man was desperate for a miracle in his life. He shouted loud to Jesus to get His attention. Even when the people rebuked him, he continued to shout all the more. Are you desperate enough to continually cry out to God for a miracle in your situation?

The blind man did not call Him Jesus of Nazareth, as the common people did, but Jesus, the son of David, a title of the Messiah. That is an indication of his faith that Jesus is the Messiah and was able to heal him.

When the people called the blind man, even before he was healed, they asked him to cheer up. We don’t have to wait for the miracle to take place in our life before we cheer up. We can cheer up because we hope in God.

(Rom 12:12 NIV)  Be joyful in hope, patient in affliction, faithful in prayer.

The blind man then threw his cloak aside. This demonstrates that he is so sure that he would be healed that he was willing to leave it aside. The cloak is of great importance to the people in those times. It is used to keep warm and also as a mattress to lie on.

Sometimes when we pray for a miracle, we don’t really believe in it. We have backup plans in case the miracle does not come. There is a difference between partnering God for a miracle and setting up backup plans.

The Israelites prayed for God’s protection and still put up a guard to protect themselves. Perhaps the Lord will use the guard as a means to protect them. This kind of effort is not due to the lack of faith.

However, if the blind man says he believes that he will be healed but still cling on tightly to his walking stick, it is an indication that he did not really believe he would receive the healing.