Skip to content
Home > Detailed discussion with Roman Catholics > Is There a Purgatory? 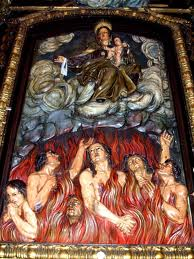 Roman Catholics believe that after death, they will enter a temporary state of suffering to pay for the penalty of their sins, and by doing so is purified before they enter heaven. This state is called purgatory and Catholics believe it has its foundation in the following verses.

This temporary place of punishment (until you have paid the last penny) is not hell, which is eternal; therefore, it is purgatory.

Catholics reason that since certain sins will not be forgiven in the world to come, it is implied that some others will.

However, the main proof of purgatory, they believe, is found in the second book of Machabees (not found in the Protestant Bible).

2 Machabees 12:45,46 And making a gathering he sent twelve thousand drachmas of silver to Jerusalem for sacrifice to be offered for the sins of the dead, thinking well and religiously of the resurrection.

Protestants do not believe that Matthew 5:25­26 is talking about purgatory. Firstly, Jesus was talking about being reconciled to your brother before you make your sacrifices to God. The verses that follow should be best understood in the same context, that another reason we should be quickly reconciled with our brother is so that he will not bring us to court. This is the most logical and natural interpretation and the Catholic need not resort to a sudden change in interpretation to one whereby the verse is symbolically teaching on purgatory. Even if we were to follow the Catholics’ form of interpretation, which is symbolically, the sinner is cast into prison until he pays the last penny, which is forever, because he has nothing to pay with. Therefore, this eternal place cannot be purgatory.

Even Matt 12:32 does not prove purgatory. The expression `either in this world or in the world to come’ is merely a strong way of saying that the sin against the Holy Spirit will never be forgiven. Notice that when Luke says the same thing without the emphasis, the verse is reduced to as follows:

Luke 12:10 (NIV) And everyone who speaks a word against the Son of Man will be forgiven, but anyone who blasphemes against the Holy Spirit will not be forgiven.

The Catholic’s main proof of purgatory, which is found in 2 Machabees 12:45-46, is not accepted by Protestants because we do not regard the book of Machabees to be the Word of God. This is for some very good reasons. Suicide seems to be commended in II Machabees 14:41,42 and elsewhere in the book, the writer apologises for defects. It is inconceivable that this could be the Word of God.

Read more about Mistakes in the Book of Machabees

The Bible nowhere speaks of a temporal place of punishment after death for believers but clearly states that when the believer dies, he returns immediately to God and enters into rest.

Lk 16:22 “The time came when the beggar died and the angels carried him to Abraham’s side. (NIV)

And to the thief who was crucified with Jesus, He said, “I tell you the truth, today you will be with me in paradise.” (Luke 23:43)

Should we intercede for the dead?

Roman Catholics believe that  “there is purgatory, and that the souls there detained are aided by the suffrages (prayers) of the faithful and chiefly by the acceptable sacrifice on the altar.” (Source: Council of Trent)
​
The argument from Machabees