Prophecies are a test of God’s word

Let us consider how difficult it is to foretell the future. Did any human prognosticators foresee the rapid collapse of the Soviet Union? Did any seers have a premonition that the Berlin Wall would crumble so suddenly? These dramatic events caught the world by surprise. On the other hand, during the Persian Gulf War of 1991 some self-proclaimed prophets foresaw this as Armageddon in the making. The prophesied Armageddon will occur, but this was not it.

Prophecy is God’s signature on world history, and on the future of the world. It should be no surprise that the Holy Bible is the only religious book in the whole world with accurate prophecies. Prophetic content would tend to expose any impostor for no man or being outside of an all-knowing, omnipotent, and eternal God could foretell all of human history before it came to pass.

Fulfilled prophecy is strong evidence that God is the author of the Bible because when you look at the mathematical odds of prophecy being fulfilled, you realize that it is impossible for the prophesy to have been fulfilled by chance. It has to be the work of a God who is in control of all events – past, present and future. The Bible tells us that no one other than God is able to know the future.

None other than God can prophesy

Other than the Bible, we do not find detailed prophecies that have been proven to be correct. These are unlike predictions made by so called “prophets” that are so general that they can be interpreted in many ways, thus ensuring a high chance of fulfillment.

Prophecies of the false “prophets” are usually general and open to many interpretations.

Some believe that God is not the only one who could foretell the future. How about Nostradamus, Mother Shipton or Edgar Cayce? 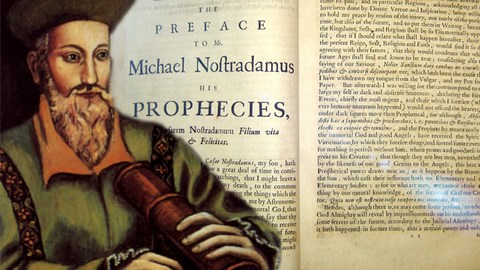 Consider the  prophecies by Nostradamus, which have been interpreted in so many ways because it is so general.

Contrast this to Bible prophecies that mention the subject of the prophecy by name and exactly what will come to pass in detail.

The law of truly large numbers says that, with a large enough sample, many things which seem so odd as to not be coincidental are actually likely to happen and are not so odd after all

Many prophecies of the false prophets have been proven to be incorrect.

Even after allowing for various interpretations, many of the prophecies by these people have been proven to be incorrect. This clearly reveals that their source of the “prophecies” is not God, who would not have made the mistakes.

(Deuteronomy 18:22)  If what a prophet proclaims in the name of the LORD does not take place or come true, that is a message the LORD has not spoken. That prophet has spoken presumptuously.

Many of the prophecies of the likes of Nostradamus have been proven to be plain incorrect. For example, he wrote :

​First of all, the predictions of such people are very general, allowing for various interpretations. Obviously if something can be interpreted in many ways, the likelihood of one interpretation being correct is very high.

The year 1999 seven months
From the sky will come the great King of Terror.

If something falls from the sky in July, 1999, you can bet Nostradamus will be credited with predicting it, even if nobody can figure out who this Mongol king might be. But as we know it, nothing happened.

Interpretations are distorted and stretched to make something look like an accurate prediction.

Sometimes people are so enthusiastic about attributing a successful prediction that common sense interpretation is thrown out. For example, some have claimed that Nostradamus predicted the rise of Hitler, giving this prediction as proof.

This prediction has been translated into English as follows:

Beasts wild with hunger will cross the rivers,
The greater part of the battle will be against Hitler.
He will cause great men to be dragged in a cage of iron,
When the son of Germany obeys no law.

‘Germania’ is a term which refers to an ancient region of Europe, north of the Danube and east of the Rhine. It may also refer to a part of the Roman Empire corresponding to present-day northeastern France and part of Belgium and the Netherlands. There is no way it can be translated as “Germany”. And why Hister refer to Hitler rather than exclusively to an area of the Danube, which even Nostradamians recognize as the common usage of the term in his day.

We can be confident because we are important in God’s sightWe are wonderfully maid (Psa 139:14-16 NIV)  I praise you because I am fearfully and wonderfully made; your works are

No favoritism with your subordinates(Eph 6:9 NIV)  And masters, treat your slaves in the same way. Do not threaten them, since you know that he who is both their Master