How Books of New Testament Were Selected 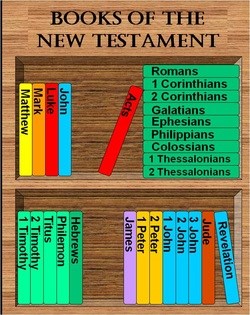 The New Testament used by Christians also contain the books that were accepted by the community during Jesus’ time.

How were the books of the New Testament chosen? We noted earlier that they were circulated during the time when the eyewitnesses of Jesus were still alive. These people could verify with their own experiences whether what the New Testament writers wrote were true or false. They would accept a writing as authentic only when they knew that the reports concerning Christ were true. The early church also knew who the disciples or subsequent apostles of Christ were. Only their teachings were regarded as authentic.

At a very early date it appears that the 4 gospels were united in one collection. This fourfold collection was known as “The Gospel” in the singular, not “The Gospels” in the plural, as there was only one Gospel narrated in four records. About AD 115, Ignatius, bishop of Antioch, refers to “The Gospel” as an authority writing even though he knew of more than one gospel. The collection of Paul’s letters was brought about together the same time as the collection of the fourfold Gospel. The only books about which there was any doubt after the middle of the second century were some of those which came at the end of our New Testament. This is understandable when we realize that the collection of the New Testament writings were made at different times and places and the contents of the various collections were not always the same. This helps to explain why not all the New Testament books were at first received without hesitation. However, a consensus finally evolved at the Synod of Hippo (AD 393) and the Synod of Carthage (AD 397).

We have evidence from the work of early Christians writers – Polycarp, Papius, Justin Matyr – from as early as the second century that the books of the New Testament were regarded by them as authentic.

The Trinity: In several passages the Qur’an speaks out specifically against “some kind of trinity” [e.g. Sura 5:72-73 and 5:116-118] and believing in it is supposedly one of the worst

(John 8:23)  But he continued, “You are from below; I am from above. You are of this world; I am not of this world. Jesus says plainly that he comes