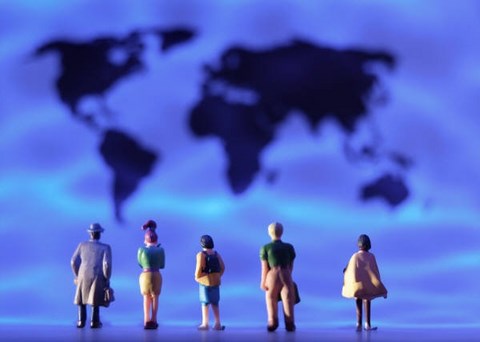 Those people who scored high on the gift of missionary had high scores on the following:

– I feel comfortable relating to ethnic and minorities, and they seem to accept me.

– I feel I could learn another language well in order to minister to those in a different culture.

– People of a different race or culture have been attracted to me, and we have related well.

– I would be willing to leave comfortable surroundings if it would enable me to share Christ with more people.

– More than most, I have had a strong desire to see peoples of other countries won to the Lord.

In summary, the person God chose to be a missionary first of all is someone who has a deep burden for lost souls. Secondly, this person is not racist and completely flexible in terms of adapting to another culture. Note that both conditions are necessary in order to be a good missionary.

There are many people who have a deep burden for lost souls. But some of these people do not have the gift of missionary. They cannot accept certain race totally. They are completely inflexible when it comes to food. They must have an absolutely clean environment. It is very likely that God did not call this person to be a missionary. It does not mean that everyone with a burden for souls need to and can become a missionary. Those who lack the ability to adapt to other cultures can still reach out to lost souls by:

On the other hand, there are people who can adapt to any culture. They eat anything. They are comfortable in dirty surroundings. But they do not have a burden for lost souls. This person is also not a missionary in the sense that he is not called to go to a foreign land to preach. But that person can still serve God by making himself available to go abroad to serve in other areas such as administration, service, etc.

The biblical basis for the gift of missionary.

The word missionary never appeared once in the whole Bible. Yet we say that it one of the gifts of the Holy Spirit because it is most likely referred to as the gift of apostleship.

1 Cor 12:28 And in the church God has appointed first of all apostles, second prophets, third teachers, then workers of miracles, also those having gifts of healing, those able to help others, those with gifts of administration, and those speaking in different kinds of tongues.

The word apostle means one who is sent as can be seen from the following verse.

Mark 3:14 He appointed twelve­­designating them apostles ­­that they might be with him and that he might send them out to preach.

Is everyone a missionary?

Matthew 28:19­20 (NIV) Therefore go and make disciples of all nations, baptizing them in the name of the Father and of the Son and of the Holy Spirit, 20 and teaching them to obey everything I have commanded you. And surely I am with you always, to the very end of the age.”

This is a very famous verse which shows God=s missionary calling. Is this verse intended for the church of God or for the individual? The implication is different. If this verse is meant for the individual, then every single Christian must go on mission trips. If this commandment is directed at the individual church, it means that God expects all churches to send out missionaries to other parts of the world. On the other hand, if this commission is directed at the church of God in general, then it simply means that God wants his church on earth to reach out to the unsaved in other parts of the world.

I believe that Matt 28:19-20 is a calling to the church of God in general and not to the individual Christian or even the individual church. The church of God must send missionaries to the other parts of the world. It does not mean that every Christian must leave his country to be a missionary. It also does not mean that every single church must send people out to other ethnic groups.

Acts 13:2­5 (NIV) While they were worshipping the Lord and fasting, the Holy Spirit said, “Set apart for me Barnabas and Saul for the work to which I have called them.” 3 So after they had fasted and prayed, they placed their hands on them and sent them off. 4 The two of them, sent on their way by the Holy Spirit, went down to Seleucia and sailed from there to Cyprus. 5 When they arrived at Salamis, they proclaimed the word of God in the Jewish synagogues. John was with them as their helper.

This passage teach that the church prayed that God will reveal to them who to send. If it is everyone=s job to go, then there is no need to ask the Holy Spirit to choose. Just take turns to go.

It is unthinkable that the Great Commission applies to everyone because if everyone is sent, who will be there to support the missionaries financially?

1 Corinthians 9:14 (NIV) In the same way, the Lord has commanded that those who preach the gospel should receive their living from the gospel.

Missions are never undertaken out of one=s own fancy. The Holy Spirit is the Director of missions and missionaries should move only when the Spirit dictates.

Acts 16:6­10 (NIV) Paul and his companions travelled throughout the region of Phrygia and Galatia, having been kept by the Holy Spirit from preaching the word in the province of Asia. 7 When they came to the border of Mysia, they tried to enter Bithynia, but the Spirit of Jesus would not allow them to. 8 So they passed by Mysia and went down to Troas. 9 During the night Paul had a vision of a man of Macedonia standing and begging him, “Come over to Macedonia and help us.” 10 After Paul had seen the vision, we got ready at once to leave for Macedonia, concluding that God had called us to preach the gospel to them.

How do we know we have a missionary calling?

The first step is to make yourself available to God. God seldom calls people who are unwilling to go.

God could have summoned Isaiah straight away but He chooses to give Isaiah the time to volunteer himself.

We also need to ask God to reveal to us if it is His will that we go on missionary trips. In the early church days, the people consulted the Holy Spirit=s will as to who will be sent as missionaries.

One good way to test if we have the missionary gift is just to sign ourselves up for short trips.

If God intends to call us for missions, He will show to us in such trips by making it very fulfilling for us.

Does God give us a burden for a particular country?

Hudson Tailor had a special love for China and was eventually called to introduce Christianity for China. He once said that if he had a thousand lives, he would live every single one for China.

A burden for a particular country can give us a hint as to where God may be sending us.

We can also talk to missionaries to get a better understanding of mission life and see if this is suitable for us.

Does the gift of apostleship still exist today?

There are two schools of thought here. The first believes that apostles refer to a special group of people who lived during Christ=s time and were appointed by Christ personally; as a result, they could not be found today. The Easton Bible Dictionary says:

It was characteristic of the apostles and necessary…

(1) that they should have seen the Lord, and been able to testify of him and of his resurrection from personal knowledge

The second school of thought believes that apostles still exist today. This is because:

(1) After the resurrection, Jesus appeared to the Twelve and also to all the other apostles, indicating that there were many apostles other than the Twelve which probably Jesus did not commission Himself.

1 Corinthians 15:5­7 (NIV) and that he appeared to Peter, and then to the Twelve. 6 After that, he appeared to more than five hundred of the brothers at the same time, most of whom are still living, though some have fallen asleep. 7 Then he appeared to James, then to all the apostles,

(2) The gift of apostleship is mentioned as one of the gifts of the Holy Spirit. Therefore, the Holy Spirit can still administer the gift even after Christ has gone. In fact, we read in the early church that the Holy Spirit is active in sending people out from the church to other places to preach and set up churches.

Acts 13:2­5 (NIV) While they were worshipping the Lord and fasting, the Holy Spirit said, “Set apart for me Barnabas and Saul for the work to which I have called them.” 3 So after they had fasted and prayed, they placed their hands on them and sent them off. 4 The two of them, sent on their way by the Holy Spirit, went down to Seleucia and sailed from there to Cyprus. 5 When they arrived at Salamis, they proclaimed the word of God in the Jewish synagogues. John was with them as their helper.

The concept of missions in the Bible

Interestingly, the term mission is not found in the Scriptures, yet the concept of mission permeates the entire Bible.

When God called Abraham and his descendants, they were chosen, not to be exclusive vessels, but rather to be a means of blessing “all families of the earth” (Gen. 12:1­3: 18:16­19; 22:9­19; 26:1­5; Gen. 28:10­14). Later, God told Israel that they had been elected as God’s chosen people and are to be the recipient and guardian of God’s special revelation and the channel through which the Redeemer would enter the stream of human history (Isa. 49:1­10). Jeremiah was called to be a prophet to all nations (Jer. 1:3­10) and spoke out in judgment against them.

The call to missions is even clearer in the New Testament. Each of the Gospels and Acts contains an account of His mandate to His followers, telling them to go to all the world, make disciples, baptize them, and preach the gospel (Matt. 28:19­20; Mark 16:15­16; Luke 24:46­49; John 20:21­22; Acts 1:8). Jesus assumed that the church would reach out beyond itself. The church was to cross all barriers­­to reach out to all ethnic groups, clans, tribes, social classes, and cultures. The message of salvation was to be shared with all people everywhere until everyone has had the opportunity to hear the message of Jesus and accept Him as Lord.

Matthew 28:19­20 (NIV) Therefore go and make disciples of all nations, baptizing them in the name of the Father and of the Son and of the Holy Spirit, 20 and teaching them to obey everything I have commanded you. And surely I am with you always, to the very end of the age.”