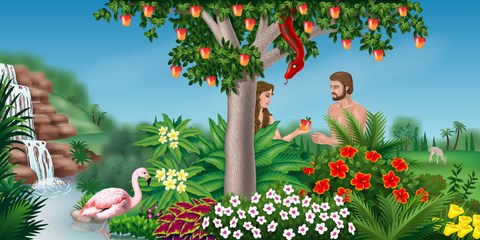 Genesis is the book about beginnings. It starts off by describing how God created the entire universe and every living thing in it. The focus narrows from creation of the universe to creation of the first family (1:1-2:25). Trust in a wily serpent rather than in God brings sin into the world and shows God’s judgment on sin. Thus human life is lived out in the suffering, pain, and frustration of the world we know (ch. 3). Humans multiply their race but sank deeper and deeper into their sin. Through the flood, God eliminates all humanity except the family of Noah, but human sin continues, bringing necessary divine punishment of the nations at the tower of Babel (9:18-11:9).

In spite of man’s sinfulness, God reveals His plan to redeem and bless humanity. He calls one man of faith–Abraham–and gives His promises of land, nation, fame, and a mission of blessing for the nations. New generations led by Isaac and Jacob find God continuing to lead them, to call them to be His people, and to renew His promises to them.

Immediately after God created man, He blessed him. God is still interested in blessing man today.

Gen 1:27 So God created man in his own image, in the image of God he created him; male and female he created them. 28 God blessed them and said to them, “Be fruitful and increase in number; fill the earth and subdue it. Rule over the fish of the sea and the birds of the air and over every living creature that moves on the ground.”

Discussion : In what ways have God blessed you?

If we disobey God, we not only lose our blessings, we take on the curse of God.

The woman, eve, disobeyed by eating fruit from the tree despite being forbidden by God to do so. As a result, she received the curse of God.

Gen 3:16 To the woman he said, “I will greatly increase your pains in childbearing; with pain you will give birth to children. Your desire will be for your husband, and he will rule over you.” 17 To Adam he said, “Because you listened to your wife and ate from the tree about which I commanded you, ‘You must not eat of it,’ “Cursed is the ground because of you; through painful toil you will eat of it all the days of your life.

Discussion : Think of people in the Bible who lost their blessings and were severely punished by God for their sins.

Being righteous is the key to receiving God’s blessings.

God later planned to destroy the whole world by flood because of their gross disobedience. Only Noah found favor with God.

Gen 6:8 But Noah found favor in the eyes of the LORD. 9 This is the account of Noah. Noah was a righteous man, blameless among the people of his time, and he walked with God.

Because Noah found favor with God by being righteous, he also received the blessings of God.

Gen 9:1 Then God blessed Noah and his sons, saying to them, “Be fruitful and increase in number and fill the earth.

Discussion : Think of people in the Bible who were greatly blessed by God because of their uprightness.

God blesses us so that we could be a blessing to others.

God called Abraham to migrate to Canaan, assuring him that he would father a vast nation. Because he obeyed, God promised him great blessings. Yet these blessings (we can say were well deserved) were intended by God to be passed on so that they could be a blessing to others.

Gen 12:2 “I will make you into a great nation and I will bless you; I will make your name great, and you will be a blessing. 3 I will bless those who bless you, and whoever curses you I will curse; and all peoples on earth will be blessed through you.”

In the Holy Land there are two lakes. One is called the Sea of Galilee. For thousand of years it has been a delightful lake; today fishermen still catch fish there, just as they did in the days of Jesus. The other lake, a little to the south, is the Dead Sea. It is formed by the same River Jordan that feeds Galilee. But its waters are so bitter and brackish that nothing can live either in it or near it. It is truly a dead sea. The same water supplies both these lakes. What is the difference? The only difference is that Galilee has an outlet while the Dead Sea has none. The Jordan=s waters flow into Galilee and out again, and the lake is always fresh and pleasant. The Dead Sea has no outlet and the only way its waters leave is by evaporation. And when they evaporate, they leave salt and other chemicals behind, resulting in increasing bitterness.

Application : Consider what God has given us and how we can use these things to be a blessing to others.

Don’t give up our blessings for temporal things.

Genesis 25:30­34 (NIV) He said to Jacob, “Quick, let me have some of that red stew! I’m famished!” (That is why he was also called Edom.) 31 Jacob replied, “First sell me your birthright.” 32 “Look, I am about to die,” Esau said. “What good is the birthright to me?” 33 But Jacob said, “Swear to me first.” So he swore an oath to him, selling his birthright to Jacob. 34 Then Jacob gave Esau some bread and some lentil stew. He ate and drank, and then got up and left. So Esau despised his birthright.

Discussion: Share some incidences when we have forgone God’s blessing because we wanted to satisfy our immediate desires.