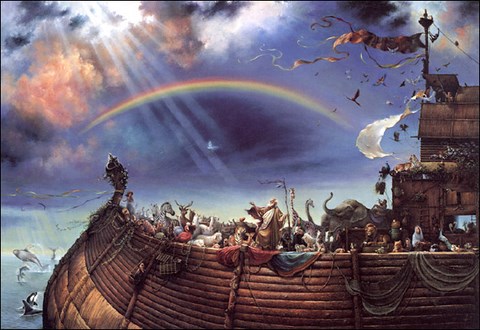 Noah received an awesome task from God. He was asked not just to build an ark of phenomenal proportions but he was also asked to gather all the animals God had instructed and to repopulate the earth through his family. This story is a good lesson for us for God also gives us awesome tasks. How do we deal with those tasks?

Genesis 6:9  This is the history of Noah and his family. Noah was a righteous man, the only blameless man living on earth at the time. He consistently followed God’s will and enjoyed a close relationship with him. 10Noah had three sons: Shem, Ham, and Japheth.

Why was Noah singled out to perform the task and not any other people. We were told in earlier verses the people were all wicked, except Noah.

Genesis 6:5  Now the Lord observed the extent of the people’s wickedness, and he saw that all their thoughts were consistently and totally evil.

We too cannot expect to be called to do anything great for God if we are living a life of willful disobedience to God.

Genesis 6:14  “Make a boat from resinous wood and seal it with tar, inside and out. Then construct decks and stalls throughout its interior. 15  Make it 450 feet long, 75 feet wide, and 45 feet high. 16Construct an opening all the way around the boat, 18 inches below the roof. Then put three decks inside the boat—bottom, middle, and upper—and put a door in the side.

The boat was of huge proportions. It was the length of one and a half football fields and as high as a four-story building. It was an awesome task that God gave Noah. God has not stopped giving us awesome tasks. He gave Moses the awesome task of bringing two million Jews out of Egypt. And his successor Joshua had the awesome task of taking the well-fortified city of Jericho.

Many people freak out when they are given awesome tasks. Noah probably did not but many other great men did. Moses did. And we too may freak out when we know of what God wants us to accomplish. Therefore this study of Noah and the building of the ark can help us in that regard.

When God gives us an awesome task, He also guides us

Genesis 6:14  “Make a boat from resinous wood and seal it with tar, inside and out. Then construct decks and stalls throughout its interior. 15  Make it 450 feet long, 75 feet wide, and 45 feet high. 16Construct an opening all the way around the boat, 18 inches below the roof. Then put three decks inside the boat—bottom, middle, and upper—and put a door in the side.

God did not ask Noah to build a huge ark and figure out himself how to do it. He gave very specific instructions. God knew that Noah, at his time, would not have the technology to build an ark of that size so God gave him the technology. The boat was exactly six times longer than it was wide—the same ratio used by modern shipbuilders.

Do you have an awesome task from God but do not know how to proceed? Why not ask God to show you how? Ask God to give you the same guidance that He gave Noah to accomplish that gigantic task.

The way to accomplish God awesome task is to do as God commanded.

Genesis 6:22  So Noah did everything exactly as God had commanded him.

When we ask God to show us how to accomplish that task, we must do so with the attitude that we will obey whatever He says. It is no point asking for guidance when we have no intention of following the guidance unless it corresponds with our way of doing things.

God does not just give awesome tasks to young people

Genesis 6:5So Noah did exactly as the Lord had commanded him. 6He was 600 years old when the flood came…

We need to shake off the mentality that God only uses young people and that old people should just lay back and do nothing in church. The Bible is filled with examples of how God uses even older people for mighty tasks. And Noah is a fine example.