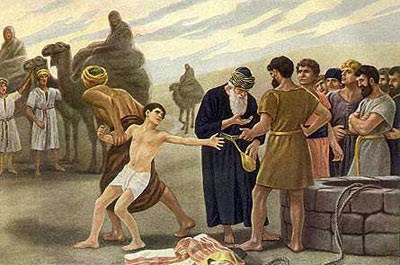 When things go wrong, God is still in control. God can turn “bad” situation around and use them for His purpose.

(Gen 37:19-28 NIV) “Here comes that dreamer!” they said to each other. {20} “Come now, let’s kill him and throw him into one of these cisterns and say that a ferocious animal devoured him. Then we’ll see what comes of his dreams.” {21} When Reuben heard this, he tried to rescue him from their hands. “Let’s not take his life,” he said. {22} “Don’t shed any blood. Throw him into this cistern here in the desert, but don’t lay a hand on him.” Reuben said this to rescue him from them and take him back to his father. {23} So when Joseph came to his brothers, they stripped him of his robe–the richly ornamented robe he was wearing– {24} and they took him and threw him into the cistern. Now the cistern was empty; there was no water in it. {25} As they sat down to eat their meal, they looked up and saw a caravan of Ishmaelites coming from Gilead. Their camels were loaded with spices, balm and myrrh, and they were on their way to take them down to Egypt. {26} Judah said to his brothers, “What will we gain if we kill our brother and cover up his blood? {27} Come, let’s sell him to the Ishmaelites and not lay our hands on him; after all, he is our brother, our own flesh and blood.” His brothers agreed. {28} So when the Midianite merchants came by, his brothers pulled Joseph up out of the cistern and sold him for twenty shekels of silver to the Ishmaelites, who took him to Egypt.

Joseph’s brothers plotted evil against him. Yet this is part of God’s plan to save His people from hunger. As we read on, we find that Joseph became the person responsible for storing food to prepare for the years of famine so that God’s people could be saved.

Are you caught in a “bad” situation right now? Trust God to use this situation to work for His good.

God is in control of the things that are happening to us and He is interested in guiding us.

God revealed to Joseph what He was going to do.

(Gen 37:5-7 NIV) {5} Joseph had a dream, and when he told it to his brothers, they hated him all the more. {6} He said to them, “Listen to this dream I had: {7} We were binding sheaves of grain out in the field when suddenly my sheaf rose and stood upright, while your sheaves gathered around mine and bowed down to it.”

(Gen 41:1-4 NIV) When two full years had passed, Pharaoh had a dream: He was standing by the Nile, {2} when out of the river there came up seven cows, sleek and fat, and they grazed among the reeds. {3} After them, seven other cows, ugly and gaunt, came up out of the Nile and stood beside those on the riverbank. {4} And the cows that were ugly and gaunt ate up the seven sleek, fat cows. Then Pharaoh woke up.

God is in control of the things around us and He wants to guide us. He frequently reveals His plans to His people. Knowing this truth, we can ask God to give us directions in our life and to warn us of situation ahead so that we can avoid the pitfalls.

Because Joseph knew that God is in control, he could forgive.

(Gen 45:4-7 NIV) Then Joseph said to his brothers, “Come close to me.” When they had done so, he said, “I am your brother Joseph, the one you sold into Egypt! {5} And now, do not be distressed and do not be angry with yourselves for selling me here, because it was to save lives that God sent me ahead of you. {6} For two years now there has been famine in the land, and for the next five years there will not be plowing and reaping. {7} But God sent me ahead of you to preserve for you a remnant on earth and to save your lives by a great deliverance.

It is easier to forgive if one knows that the bad that has happened to us will somehow work for good. It is never easy to do that but Joseph did it and that was the key to his ability to forgive his brothers. He did not see it as a bad thing but rather as a good thing!

Is there someone who has wronged you and done terrible things to you? Ask God to turn that situation for good and give you the ability to forgive that person.

Situations can distract us from God’s purposes but God is still in control. He can put us back on track.

Are you trying to do God’s work but hindered by many things? Ask God to once again take control of the situation and put you back on track.

Situation may seem like God’s people would be destroyed or hurt but God is still in control. He would not allowed His people to be destroyed.

(Gen 45:6-7 NIV) For two years now there has been famine in the land, and for the next five years there will not be plowing and reaping. {7} But God sent me ahead of you to preserve for you a remnant on earth and to save your lives by a great deliverance.

Throughout history, Satan has tried to wipe out God’s people from the face of this earth but to no success. Jews and Christians have been persecuted throughout the centuries but God is in control to protect His people.

The apostle Paul shared how God protected him from harm.

(2 Cor 4:8-9 NIV) We are hard pressed on every side, but not crushed; perplexed, but not in despair; {9} persecuted, but not abandoned; struck down, but not destroyed.

Are you experiencing harsh persecution or trials? Trust that God is in control and ask Him to deliver you from the situation.