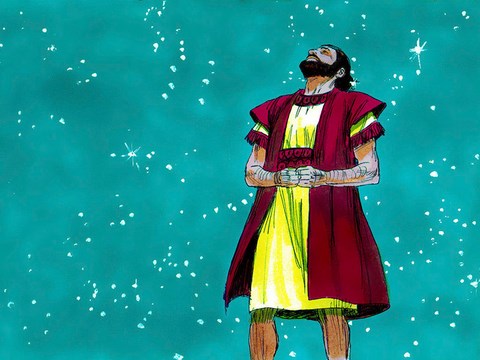 Genesis 12:1  Then the Lord told Abram, “Leave your country, your relatives, and your father’s house, and go to the land that I will show you. 2  I will cause you to become the father of a great nation. I will bless you and make you famous, and I will make you a blessing to others. 3I will bless those who bless you and curse those who curse you. All the families of the earth will be blessed through you.”

God continues to make promises to us today

God made Abraham a great promise. He is still making promises to His children today. The Bible is filled with promises of God for every occasion. Let’s learn to draw on the promises of God. A person who does not do that is a man who lives a poor life even though he has a lot of money in his bank account. The Bible contains the riches of God’s promises but that is of no good unless one applies it.

God’s promise comes with a condition

I love to claim the following promise for myself.Psalms 1 Oh, the joys of thosewho do not follow the advice of the wicked,

or stand around with sinners,

or join in with scoffers.

2  But they delight in doing everything the Lord wants;

day and night they think about his law.

bearing fruit each season without fail.

and in all they do, they prosper.

I love to prosper in everything I do. Who doesn’t! Yet the promise comes with a condition. I must delight in the law of the Lord. Some of us wonder why God’s promises never come true in our lives. Have we read the conditions attached? For example, we wonder that our life is not going smoothly and we do not prosper in everything we do. Do we really delight in God’s laws?

God promises us things beyond our imagination

Genesis 15:3 You have given me no children, so one of my servants will have to be my heir.” 4  Then the Lord said to him, “No, your servant will not be your heir, for you will have a son of your own to inherit everything I am giving you.” 5  Then the Lord brought Abram outside beneath the night sky and told him, “Look up into the heavens and count the stars if you can. Your descendants will be like that—too many to count!”

Just when Abraham lost all hope to have children, God promised that his descendants would be as many as the stars in the sky. Often we look at the situation and despair but we forget that God is above the situation. His promises are above and beyond what we can imagine.

It is dangerous to doubt God’s promises

Genesis 18:10  Then one of them said, “About this time next year I will return, and your wife Sarah will have a son. “Now Sarah was listening to this conversation from the tent nearby. 11  And since Abraham and Sarah were both very old, and Sarah was long past the age of having children, 12  she laughed silently to herself. “How could a worn-out woman like me have a baby?” she thought. “And when my master—my husband—is also so old?” 13Then the Lord said to Abraham, “Why did Sarah laugh? Why did she say, ‘Can an old woman like me have a baby?’ 14  Is anything too hard for the Lord? About a year from now, just as I told you, I will return, and Sarah will have a son.”

Sarah provoked God by doubting that what God said will come to pass. We too sometimes focus on the severity of the situation and doubt that God can actually rise above the situation and help us to solve our problems.

Genesis 21:1  Then the Lord did exactly what he had promised. 2Sarah became pregnant, and she gave a son to Abraham in his old age. It all happened at the time God had said it would. 3And Abraham named his son Isaac. 4Eight days after Isaac was born, Abraham circumcised him as God had commanded. 5Abraham was one hundred years old at the time.

Who could believe that Abraham would have a son at 100 years of age? It seems to Abraham and Sarah that God would fail in His promise but again God proved that He does not fail in any of His promises. His promises will come true in His own timing.

Because of her doubt, worry, and fear, Sarah had forfeited the peace she could have felt in God’s wonderful promise to her. How often we create stress for ourselves by not trusting in God. At the end of the adversity, we realize that God’s promise to help us has come true after all but we know this too late as we have already forfeited the peace. The way to bring peace to a troubled heart is to focus on God’s promises.

Do not interfere with God’s promises

Genesis 16:1  But Sarai, Abram’s wife, had no children. So Sarai took her servant, an Egyptian woman named Hagar, 2and gave her to Abram so she could bear his children. “The Lord has kept me from having any children,” Sarai said to Abram. “Go and sleep with my servant. Perhaps I can have children through her.” And Abram agreed. 3  So Sarai, Abram’s wife, took Hagar the Egyptian servant and gave her to Abram as a wife. (This happened ten years after Abram first arrived in the land of Canaan.) 4  So Abram slept with Hagar, and she became pregnant.

God promised that the promise to Abraham will be fulfilled in a certain way. When Abraham tried to “help” God to fulfill His promise in another way, all kinds of problems evolved. The descendants of Ishmael, who was born of Hagar, was to be a source of conflict for Israel. (Ps 83:5-6) It is generally believed that the Arabs descended from Ishmael.

There are times when God gives us a promise as well as the specific means by which this promise would be fulfilled. We are to do according to what God says and not try to think we are helping God by doing it in other ways.