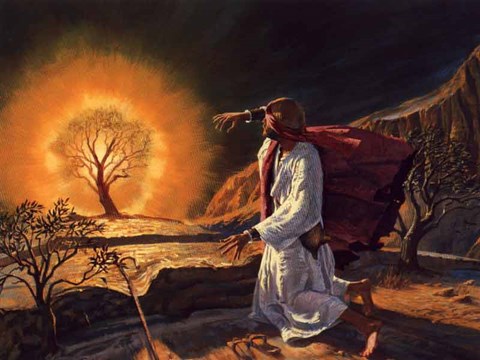 Exodus 3:1  One day Moses was tending the flock of his father-in-law, Jethro, the priest of Midian, and he went deep into the wilderness near Sinai, the mountain of God. 2  Suddenly, the angel of the Lord appeared to him as a blazing fire in a bush.

Moses was busy doing his own things when God suddenly called him. We too may be called by God suddenly. We may think that the best time to go into full time ministry is when we are settled down financially but God may have other plans for us. Jesus also called His disciples when they were not expecting to give up everything to follow their Master.

God may also call us unexpectedly to a new area of ministry. We have to be prepared for God’s call. Do not miss out on God’ opportunities because we are unwilling to change.

God calls us in response to other people’s prayer

Exodus 3:7  Then the Lord told him, “You can be sure I have seen the misery of my people in Egypt. I have heard their cries for deliverance from their harsh slave drivers. Yes, I am aware of their suffering. 8  So I have come to rescue them from the Egyptians and lead them out of Egypt into their own good and spacious land. It is a land flowing with milk and honey—the land where the Canaanites, Hittites, Amorites, Perizzites, Hivites, and Jebusites live. 9The cries of the people of Israel have reached me, and I have seen how the Egyptians have oppressed them with heavy tasks. 10  Now go, for I am sending you to Pharaoh. You will lead my people, the Israelites, out of Egypt.”

God answers the prayer of His people. When we are called into an area of ministry, very often it is because God has heard the prayers of His people and wants to use you in answer to their prayers. Would you be used by God to answer prayers?

God’s call may be a difficult one

Exodus 3:10  Now go, for I am sending you to Pharaoh. You will lead my people, the Israelites, out of Egypt.” 11″But who am I to appear before Pharaoh?” Moses asked God. “How can you expect me to lead the Israelites out of Egypt?”

Moses went into the wilderness to run away from Pharaoh. Now God is asking him to go back to Pharaoh. That must be the most difficult thing for Moses to do.

God’s call may sometimes be in an area that matches our strengths and abilities, which would be easy for us to accomplish. At times, however, God may call us to do difficult things. Are we willing to obey God even in the difficult things?

Let Jesus be our example. He was obedient to His Father even unto death on the cross. He did not shy away from doing the difficult things.

When God calls, He also gives us support

Moses was rightfully anxious about his new call. Without God’s support, he naturally felt inadequate. But God does not call us to work by ourselves. He gives us the support we need.

He gives us detailed instructions

Exodus 3:14  God replied, “I am the one who always is. Just tell them, ‘I AM has sent me to you.’” 15God also said, “Tell them, ‘the Lord, the God of your ancestors—the God of Abraham, the God of Isaac, and the God of Jacob—has sent me to you.’ This will be my name forever; it has always been my name, and it will be used throughout all generations…18  “The leaders of the people of Israel will accept your message. Then all of you must go straight to the king of Egypt and tell him, ‘the Lord, the God of the Hebrews, has met with us. Let us go on a three-day journey into the wilderness to offer sacrifices to the Lord our God.’

He will be with us

Exodus 3:16  “Now go and call together all the leaders of Israel. Tell them, ‘the Lord, the God of your ancestors—the God of Abraham, Isaac, and Jacob—appeared to me in a burning bush. He said, “You can be sure that I am watching over you and have seen what is happening to you in Egypt.

His power will be manifested through us

Exod 4:1  But Moses protested again, “Look, they won’t believe me! They won’t do what I tell them. They’ll just say, ‘the Lord never appeared to you.’” 2  Then the Lord asked him, “What do you have there in your hand?” “A shepherd’s staff,” Moses replied. 3″Throw it down on the ground,” the Lord told him. So Moses threw it down, and it became a snake!

We will find favor with the people we are working with

Exodus 3:21And I will see to it that the Egyptians treat you well. They will load you down with gifts so you will not leave empty-handed. 22  The Israelite women will ask for silver and gold jewelry and fine clothing from their Egyptian neighbors and their neighbors’ guests. With this clothing, you will dress your sons and daughters. In this way, you will plunder the Egyptians!”

Exod 3:8  “The leaders of the people of Israel will accept your message.

Exod 3: 19″But I know that the king of Egypt will not let you go except under heavy pressure. 20So I will reach out and strike at the heart of Egypt with all kinds of miracles. Then at last he will let you go.

Exod 4:16  Aaron will be your spokesman to the people, and you will be as God to him, telling him what to say.

He will give us the words to say

Exod 4:11″Who makes mouths?” the Lord asked him. “Who makes people so they can speak or not speak, hear or not hear, see or not see? Is it not I, the Lord? 12Now go, and do as I have told you. I will help you speak well, and I will tell you what to say.”