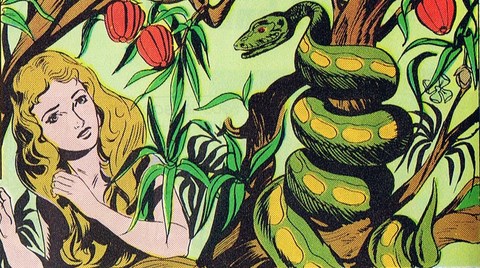 Allowed her contentment to be undermined by Satan.

Genesis 3: 1  Now the serpent was the shrewdest of all the creatures the Lord God had made. “Really?” he asked the woman. “Did God really say you must not eat any of the fruit in the garden?” 2  “Of course we may eat it,” the woman told him. 3″It’s only the fruit from the tree at the center of the garden that we are not allowed to eat. God says we must not eat it or even touch it, or we will die.”

Eve became discontented after she pondered that she has no access to that one fruit in the garden. She has forgotten that she can eat all the other fruits!

Such is the cause of discontentment. We focused on what we do not have rather than what we do have. We look at someone, who has something we do not have, and wish we had that too. But would you rather trade places with that person? Very often not because we probably have many things that he does not have. We just want the best of everything.

Avoiding comparison is a good way to avoid discontentment. Have you been discontented because you focused on something you do not have? Instead of focussing on what we do not have, let’s spend time thanking God for what we do have and when we do so, we will begin to wonder why we are not contented in the first place. If we have to compare, compare with those people who are less fortunate than us. If we complain about our food, think about those who have nothing to eat. If we do that, we would not dare to be discontented.

Not only sinned but caused others to sin.

Genesis 3: 6  The woman was convinced. The fruit looked so fresh and delicious, and it would make her so wise! So she ate some of the fruit. She also gave some to her husband, who was with her. Then he ate it, too.

It is bad enough to sin but worse to cause others to sin as well. The Bible says that a person who causes others to sin will be regarded lowly in God’s kingdom.

Let’s be careful that our advice to others are recorded in heaven. God values highly our advice that causes people to obey God but will be displeased when we encourage others to sin.

Did not take the words of God seriously

Genesis 3:  3″It’s only the fruit from the tree at the center of the garden that we are not allowed to eat. God says we must not eat it or even touch it, or we will die.” 4″You won’t die!” the serpent hissed. 5  “God knows that your eyes will be opened when you eat it. You will become just like God, knowing everything, both good and evil.” 6  The woman was convinced. The fruit looked so fresh and delicious, and it would make her so wise! So she ate some of the fruit.

Eve was convinced that the fruit would be harmless. She doubted how eating a fruit could be as serious as what God had described. Many times we fall into this same trap. We feel that God is exaggerating when He said certain things in the Bible. For example, we all agree that having an affair outside marriage is a serious sin. But what about a “harmless” look at a person of opposite sex accompanied by sexual thoughts. Surely nobody is hurt in the process. But Jesus warned about the seriousness of such sins.

Matthew 5:27  “You have heard that the law of Moses says, ‘Do not commit adultery.’ 28But I say, anyone who even looks at a woman with lust in his eye has already committed adultery with her in his heart.

We all know it is wrong to kill someone but can harboring anger thoughts be as dangerous as murder. Jesus taught so.

Let’s take the words of God seriously. God does not exaggerate because exaggerating is a sin. Let’s steer clear from certain sins we previously reasoned is harmless.

Genesis 3:5  “God knows that your eyes will be opened when you eat it. You will become just like God, knowing everything, both good and evil.” 6  The woman was convinced.

The serpent managed to convince Eve that God did not want her to eat of the forbidden fruit not because of her sake but because God was selfish and did not want Eve to have what God is having – the knowledge of good and evil. Eve was deceived because she doubted God’s goodness.

It is hard to praise God for his goodness when everything around us seems to be going wrong. But God allows trials in our lives for a purpose. Sometimes it is just to test our faith and build it up. Other times the bad situation actually work for good. The Bible promises that God always have our good in mind.

Jer 29:11  For I know the plans I have for you,” says the Lord. “They are plans for good and not for disaster, to give you a future and a hope.

Rom 8:28  And we know that God causes everything to work together for the good of those who love God and are called according to his purpose for them.

Are you currently undergoing some trials that are causing you to doubt God’s goodness? Let’s repent of our doubt and commit the situation to Him.