Does Partaking the Mass Save Us? 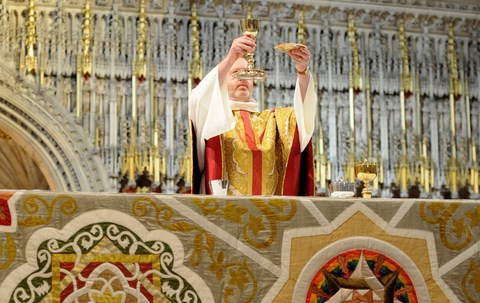 Roman Catholics believe that the bread and wine consumed during Mass are the actual body and blood of Christ under the appearance of bread and wine. Therefore, the Mass is instituted to represent and continue the sacrifice of the Cross. Catholics refer to the following verses to support their doctrine.

Matthew 26:26­28 26 While they were eating, Jesus took bread, gave thanks and broke it, and gave it to his disciples, saying, “Take and eat; this is my body.” 27 Then he took the cup, gave thanks and offered it to them, saying, “Drink from it, all of you. 28 This is my blood of the covenant, which is poured out for many for the forgiveness of sins. (NIV)

John 6:51­52 51 I am the living bread that came down from heaven. If anyone eats of this bread, he will live forever. This bread is my flesh, which I will give for the life of the world.” 52 Then the Jews began to argue sharply among themselves, “How can this man give us his flesh to eat?” (NIV)

Catholics point out that even the Jews understood this message to mean that they must eat of His flesh and drink of His blood (verse 52).

Protestants practise the eating of bread and drinking of wine simply to commemorate Jesus. They do not believe that they are actually eating the true flesh and drinking the true blood of Jesus. Here are several reasons.

Firstly, the acts of eating and drinking were familiar figurative ways of speaking among the Jews. They need not be taken literally. For example, trusting Jesus for eternal life can be symbolically translated as eating Jesus, which is the bread of life. This symbolism is easy to grasp because when we eat something, we are actually relying on it to give us life. The next verse, for example, can be interpreted symbolically.

John 6:53 Jesus said to them, “I tell you the truth, unless you eat the flesh of the Son of Man and drink his blood, you have no life in you. (NIV)

John 6:35 Then Jesus declared, “I am the bread of life. He who comes to me will never go hungry, and he who believes in me will never be thirsty. (NIV)

Jesus himself corrected his disciples’ misunderstanding of his message to mean literally eating His flesh and drinking His blood.

John 6:63 The Spirit gives life; the flesh counts for nothing. The words I have spoken to you are spirit and they are life. (NIV)

Where is the source of life? His words. Not the actual flesh, which counts for nothing.

Jesus stated clearly that the purpose of the ceremony was to commemorate Him (Luke 22:19). The object of commemoration must not be present. For example we commemorate some beloved person who has left us. Do we commemorate a friend while he is present beside us? No. similarly, how can we commemorate Christ in a ceremony which He is actually present in flesh and blood? We can only do so if He is no longer present with us physically but only his memory is with us while we partake of the bread and wine.

Finally, and most important of all, the idea that we require a continual sacrifice of Christ is not taught in the Bible. On the contrary, the Bible is clear that Christ’s death was a once­and­for­all sacrifice for our sins.

Hebrews 9:28 so Christ was sacrificed once to take away the sins of many people; and he will appear a second time, not to bear sin, but to bring salvation to those who are waiting for him. (NIV)

Hebrews 10:14 because by one sacrifice he has made perfect forever those who are being made holy. (NIV)

It is true many religions have similar teachings but it were all the same, it would not have been called by different names. In fact, underneath the surface, there are

Original sin Muslims sometimes say they don’t believe in the concept of original sin. However, this is also taught in their Quran. 002.030 PICKTHAL: And when thy Lord said unto