Skip to content
Home > Detailed discussion with Roman Catholics > Do Priests Have Power to Forgive Sins? 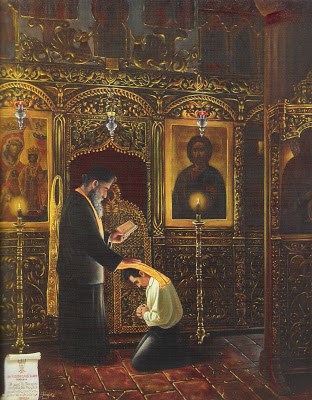 Roman Catholics believe that priests have power to forgive sins as taught by Christ himself.

John 20:23 If you forgive anyone his sins, they are forgiven; if you do not forgive them, they are not forgiven.” (NIV)

2 Cor 5:18­19 18 All this is from God, who reconciled us to himself through Christ and gave us the ministry of reconciliation: 19 that God was reconciling the world to himself in Christ, not counting men’s sins against them. And he has committed to us the message of reconciliation. (NIV)

God has also given the disciples the power of “binding” and “loosing” which Catholics believe refer to the power of granting and refusing forgiveness.

Catholics also teach that confession of one’s sins to the priest is taught by the following verses.

Acts 19:18 (NIV) Many of those who believed now came and openly confessed their evil deeds.

James 5:16 (NIV) Therefore confess your sins to each other and pray for each other so that you may be healed. The prayer of a righteous man is powerful and effective.

Protestants believe that priests cannot forgive sins because the Bible speaks of God alone as the forgiver of sins.

Ex 34:6-7 6 “The LORD, the LORD, the compassionate and gracious God, slow to anger, abounding in love and faithfulness, 7 maintaining love to thousands, and forgiving wickedness, rebellion and sin. (NIV)

The Jews understood this and were furious each time Jesus claims to forgive someone.

Luke 5:20­21 (NIV) When Jesus saw their faith, he said, “Friend, your sins are forgiven.” 21 The Pharisees and the teachers of the law began thinking to themselves, “Who is this fellow who speaks blasphemy? Who can forgive sins but God alone?” (See also Luke 7:48-49)

John 20:23, therefore, does not teach that the apostles have the power to forgive sins. The misunderstanding is due to an error in translation. The first verbs of the clause are in the aorist tense which implies the action of an instant while the second verbs are in the perfect tense implying a state that exists even before the action of the first verbs.

But if the disciples’ forgiveness of sins are only those that have already been forgiven, isn’t their job simply one of declaring that the person is in fact forgiven and not actually forgiving them. This is consistent with what we find in the Bible because we cannot find any instance in the New Testament of an apostle forgiving the sins of anyone. Instead, they go everywhere proclaiming the forgiveness of sins through Jesus Christ.

Acts 13:38 “Therefore, my brothers, I want you to know that through Jesus the forgiveness of sins is proclaimed to you. (NIV)

In another verse, Jesus tells his disciples to preach the forgiveness of sins in His name.

Luke 24:47 and repentance and forgiveness of sins will be preached in his name to all nations, beginning at Jerusalem. (NIV)

Likewise in 2 Cor 5:18­19, one sees that the ministry of reconciliation is not the authority to forgive sins but simply a message of reconciliation that God has reconcilied the world to Himself through Christ. (verse 19)

Rom 7:2 For the woman which hath an husband is bound by the law to her husband so long as he liveth; but if the husband be dead, she is loosed from the law of her husband.(KJV)

2 Tim 2:9 Wherein I suffer trouble, as an evil doer, even unto bonds; but the word of God is not bound. (KJV)

The verse Matt 18:18 has also been mistranslated. The words “bind” and “loose” are in the future perfect tense. Therefore, it refers to `bind’ and `loose’ as completed actions, not as future actions. The verse should have been translated:

In other words, Jesus is instructing the disciples to be careful not to forbid or permit anything except that which is forbidden or permitted in heaven.

Finally, James 5:16 is rather a proof against secret confession to the priest. `Confess your sins to each other’ implies that it is as much the duty of the priest to confess to the layman, as the layman to the priest.