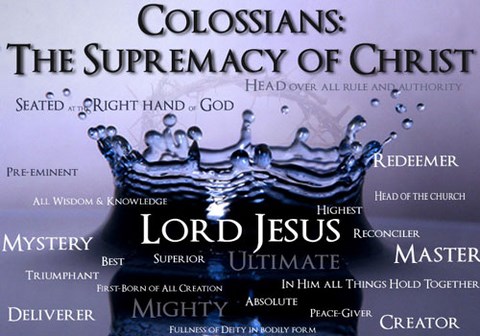 Paul wrote this epistle in AD 60–61 during his first imprisonment in Rome. This letter was written after he had received a report that they were struggling with a christological heresy. This made it necessary for Paul to correct on the false teachings and emphasize the superiority of Christ.

Creator of all things

Col 1:16 For in him all things were created: things in heaven and on earth, visible and invisible, whether thrones or powers or rulers or authorities; all things have been created through him and for him.

Jesus is not only the second Person of the Trinity through whom God the Father created all things, this verse says that all things were created for Jesus. That means that He is the heir of all things that are created.

Rom 8:14 For those who are led by the Spirit of God are the children of God. 15 The Spirit you received does not make you slaves, so that you live in fear again; rather, the Spirit you received brought about your adoption to sonship. And by him we cry, “Abba, Father.” 16 The Spirit himself testifies with our spirit that we are God’s children. 17 Now if we are children, then we are heirs—heirs of God and co-heirs with Christ, if indeed we share in his sufferings in order that we may also share in his glory.

Col 1:16 For in him all things were created: things in heaven and on earth, visible and invisible, whether thrones or powers or rulers or authorities; all things have been created through him and for him.

Christ was not only the creator of all things, He was the creator of spirit beings as well. That means that even angels and demons are subject to Him. When He walked on earth, the demons feared Him and obeyed His commands. We should never have the wrong thinking that Satan is the opposite of God. Satan is a finite and created being and cannot match God’s power. God the Father has placed all things under Jesus’ feet and we have authority in Christ as we are seated with Him in heavenly places. Therefore, in any situation that the devil has taken a foothold, use the authority of Jesus’ name to take authority in that situation.

Able to help us in our life’s problems

Col 2:6 So then, just as you received Christ Jesus as Lord, continue to live your lives in him, 7 rooted and built up in him, strengthened in the faith as you were taught, and overflowing with thankfulness.
Because Jesus is ruler over all things, our life’s problems are no match for Him. Therefore, we should live our lives rooted in Him and having faith in Him.

Able to help us in our struggles with sin

Col 2:11 In him you were also circumcised with a circumcision not performed by human hands. Your whole self ruled by the flesh was put off when you were circumcised by Christ…

The symbolism of circumcision is used here and instead of the physical flesh that is being cut off, Paul says that our sinful nature is being cut off by Christ when we became a Christian. It is no longer part of us and does not have control over us. Of course we will continue to be tempted by sin but we are no longer compelled to sin like before.
Are you struggling with any sin issue? Do not give us and do not rely on your own strength alone. Continue to pray for God’s strength to help you to overcome sin.
​