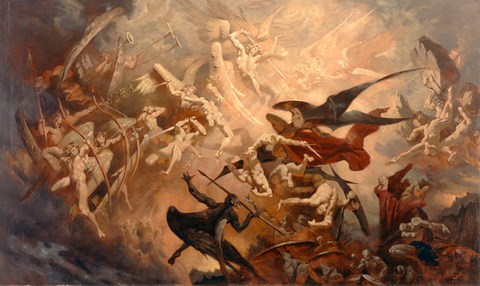 Angels are created beings and do not exist eternally with God.

The purpose of creating angels is so that they can serve God and carry out His orders.

Psa 103:20 Bless the LORD, ye his angels, that excel in strength, that do his commandments, hearkening unto the voice of his word.

Origin of Satan and demons

Satan was once a high angelic being who later rebelled against God because he wanted to be like God and receive worship.

Isaiah 14:12­15 (KJV) How art thou fallen from heaven, O Lucifer, son of the morning! how art thou cut down to the ground, which didst weaken the nations! 13 For thou hast said in thine heart, I will ascend into heaven, I will exalt my throne above the stars of God: I will sit also upon the mount of the congregation, in the sides of the north: 14 I will ascend above the heights of the clouds; I will be like the most High. 15 Yet thou shalt be brought down to hell, to the sides of the pit.

The demons were the angels who followed Satan in his rebellion against God. During the rebellion, some were cast down to earth while others were locked up in hell until this day.

When we speak of ghosts, we usually refer to the roaming spirit of a dead person. The Bible teaches that there is no such thing. When a person dies, he either goes to heaven or to hell. He will not be allowed to roam on the earth.

Luke 16:22­23 (NIV) “The time came when the beggar died and the angels carried him to Abraham’s side. The rich man also died and was buried. 23 In hell, where he was in torment…..

Therefore, in the teachings of the Bible, there are no ghosts. But there are evil spirits or fallen angels. These are very capable of imitating dead people to deceive people into believing that there are ghosts.

Matthew 4:24 (NIV) News about him spread all over Syria, and people brought to him all who were ill with various diseases, those suffering severe pain, the demon­ possessed, those having seizures, and the paralyzed, and he healed them.

Demons can cause illnesses

Matthew 9:32­33 (NIV) While they were going out, a man who was demon­ possessed and could not talk was brought to Jesus. 33 And when the demon was driven out, the man who had been mute spoke.

Blessings and Curses
How much power does Satan have
Spiritual Authority