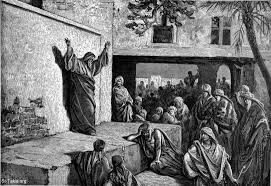 Amos was a prophet raised by God to speak against the injustice of his day. Although outwardly they appear to be religious, inwardly the society suffers from many aspects of injustice.

5:21 “I hate, I despise your religious festivals;  your assemblies are a stench to me. 22 Even though you bring me burnt offerings and grain offerings,  I will not accept them. Though you bring choice fellowship offerings,  I will have no regard for them. 23 Away with the noise of your songs!  I will not listen to the music of your harps. 24 But let justice roll on like a river, righteousness like a never-failing stream!

Amos was a shepherd and a grower of sycamore figs. Because of his humble background, he showed a heart for the downcast and oppressed in society.

Social Injustice: Being ungracious to the poor

Amos 1:6 This is what the Lord says:“For three sins of Israel, even for four, I will not relent. They sell the innocent for silver,  and the needy for a pair of sandals. 7 They trample on the heads of the poor  as on the dust of the ground and deny justice to the oppressed.

The rich in those days were extremely ungracious to the poor. When the poor could not repay their debts, the rich had them sold into slavery for debts as little as a pair of scandals.

Jesus warned against the same thing in this parable.

Matthew 18:23 “Therefore, the kingdom of heaven is like a king who wanted to settle accounts with his servants. 24 As he began the settlement, a man who owed him ten thousand bags of gold was brought to him. 25 Since he was not able to pay, the master ordered that he and his wife and his children and all that he had be sold to repay the debt. 26 “At this the servant fell on his knees before him. ‘Be patient with me,’ he begged, ‘and I will pay back everything.’ 27 The servant’s master took pity on him, canceled the debt and let him go.

28 “But when that servant went out, he found one of his fellow servants who owed him a hundred silver coins. He grabbed him and began to choke him. ‘Pay back what you owe me!’ he demanded. 29 “His fellow servant fell to his knees and begged him, ‘Be patient with me, and I will pay it back.’ 30 “But he refused. Instead, he went off and had the man thrown into prison until he could pay the debt. 31 When the other servants saw what had happened, they were outraged and went and told their master everything that had happened.

32 “Then the master called the servant in. ‘You wicked servant,’ he said, ‘I canceled all that debt of yours because you begged me to. 33 Shouldn’t you have had mercy on your fellow servant just as I had on you?’ 34 In anger his master handed him over to the jailers to be tortured, until he should pay back all he owed.
Are there any poor people that are indebted to us? Can we show them Christian kindness by being gracious to them or even forgiving them of what they owe to us?

Amos 5:11 You levy a straw tax on the poor and impose a tax on their grain. Therefore, though you have built stone mansions,you will not live in them;

though you have planted lush vineyards, you will not drink their wine.

Throughout the Bible, God’s heart goes out especially to the poor. He despises those who take advantage of the poor, who have no way defending themselves. In today’s context, exploiting the poor could take the form of paying unfair wages to those who need jobs desperately. Some companies in developing countries do that. Profits are high because the wages paid are so low that the employees  live in hardship. If we are Christian businessmen, we should ensure that our companies do not engage in such practices. If we are not, do we invest in companies that have been known to exploit the poor? If we do, we are indirectly supporting and condoning their actions.

Amos 5:12 For I know how many are your offenses and how great your sins. There are those who oppress the innocent and take bribes  and deprive the poor of justice in the courts.

(Prov 17:23 NIV)  A wicked man accepts a bribe in secret to pervert the course of justice.

We have to be objective in choosing our business dealings and do only what is best for the company. A person who gives or receives bribes pervert this justice. Instead of doing the just thing, that person does things for the benefit of the one that rewards him.

The person on the receiving end also has to be careful. We may not be receiving things that are clear-cut bribes e.g. money. But if we receive other rewards e.g. entertainment, gifts excessively to the point where our sense of justice is affected and we can no longer make objective decisions for our company then that is wrong.
​