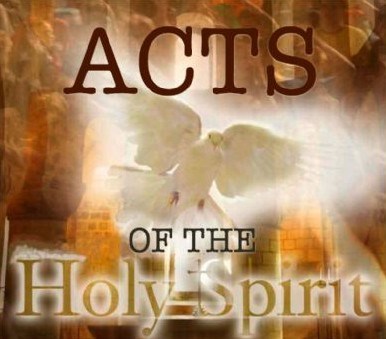 The book of Acts is called Acts of the Apostles but more aptly it is the work of the Holy Spirit working through the apostles. It is written by Luke as a sequel to the gospel of Luke, picking up exactly where Luke left off. Luke was one of the followers of the apostles and was closed to Paul.

This book details the events that took place among the early believers immediately after the ascension of Christ. It tells of how the church spread throughout the Roman empire and how it moved from the Jews to the Gentiles.

The Spirit enables us to speak the word of God boldly

Acts 4:27 Indeed Herod and Pontius Pilate met together with the Gentiles and the people of Israel in this city to conspire against your holy servant Jesus, whom you anointed. 28 They did what your power and will had decided beforehand should happen. 29 Now, Lord, consider their threats and enable your servants to speak your word with great boldness. 30 Stretch out your hand to heal and perform signs and wonders through the name of your holy servant Jesus.”

31 After they prayed, the place where they were meeting was shaken. And they were all filled with the Holy Spirit and spoke the word of God boldly.

The early Christians met with a lot of opposition when they started to share the gospel. When the apostles prayed that they would have the ability to speak the word of God boldly, God filled them with the Holy Spirit. We know from church history that many of them suffered the martyr’s death. In fact, 11 of the 12 apostles died as martyrs. They were bold and unafraid after God filled them with Holy Spirit and boldness.

The Spirit gives us wisdom when we share the gospel

Acts 6:8 Now Stephen, a man full of God’s grace and power, performed great wonders and signs among the people. 9 Opposition arose, however, from members of the Synagogue of the Freedmen (as it was called)—Jews of Cyrene and Alexandria as well as the provinces of Cilicia and Asia—who began to argue with Stephen. 10 But they could not stand up against the wisdom the Spirit gave him as he spoke.

We are sometimes afraid of what to say when we witness to others. Maybe we are not convincing enough. Maybe we would be asked a question that we cannot answer. The early believers moved in the power of the Holy Spirit to not just speak boldly but to speak with wisdom. Stephen spoke using the wisdom of the Holy Spirit such that his opponents were unable to answer him.

We are reminded of how Jesus too was able to speak words of wisdom to his opponents that many times they are left without an answer and simply faded away.

The Spirit enables us to speak in the prophetic

One of the things that the Holy Spirit enables us to do is to speak in the prophetic. Prophecy is one of the gifts of the Spirit.

Many people think that prophecy is only about foretelling the future. However, it includes “forth telling” as well. This means that the person who prophesy over you speaks forth the word that God has for you as the Spirit tells him what to say.

For the prophecy came not in old time by the will of man: but holy men of God spake as they were moved by the Holy Ghost. (2 Peter 1:21)

What is prophesied may not be pertaining to your future. It could pertain to your current situation and include guidance from God as to what you should do.

1 Cor 12:3 But the one who prophesies speaks to people for their strengthening, encouraging and comfort.
It is good to keep a record of the prophecies that were spoken to you. As you continue to ponder them and use them in prayer, they become an encouragement to you because they tell you how God sees you. When we have down seasons, it is normal to see ourselves as a failure and the words prophesied on us are often just the opposite. God wants us to be the head and not the tail and as we continue to believe and declare those words of God, our situation will start to change.
​