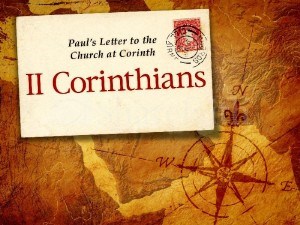 Paul wrote a total of four letters to the Corinthian church. Only two of these letters have been preserved as 1 Corinthians (the second letter) and 2 Corinthians (the fourth letter). 2 Corinthians is a special book for Christians because it offers a great deal of personal insight into Paul’s life that is not present in any other New Testament book. Through the reading of this book, we saw behind the scenes at the sufferings that Paul went through as a servant of God.

2 Cor 1:12 Now this is our boast: Our conscience testifies that we have conducted ourselves in the world, and especially in our relations with you, with integrity and godly sincerity. We have done so, relying not on worldly wisdom but on God’s grace…15 Because I was confident of this, I wanted to visit you first so that you might benefit twice. 16 I wanted to visit you on my way to Macedonia and to come back to you from Macedonia, and then to have you send me on my way to Judea. 17 Was I fickle when I intended to do this? Or do I make my plans in a worldly manner so that in the same breath I say both “Yes, yes” and “No, no”?

Paul had earlier told the Corinthian church that he was going to visit them. Later, when Paul did not go the people criticized him for being fickle. Paul had to explain that he did not change his mind because he was insincere when he first promised them but he had good reasons to later decide not to visit them. If he had visited them when the church was in that state, as an apostle, he would have taken stern actions. He therefore chose to send them a letter to give them the opportunity to repent first.

When we serve God, it is common to encounter situations where people will criticize us. We should not harbour negative feelings towards them but to always explain ourselves in a humble way like Paul did. Even though Paul was an apostle, he did not “lord” over them and become angry when they question his actions. This is a true mark of humility and demonstrates to us how godly leaders should behave differently from worldly leaders.

The other thing we can learn is not to be overly critical of other servants of God. Sometimes we may think poorly of them for something they have done without understanding the full facts of the situation or the motivation behind their actions. Or they may have truly done something which we feel is wrong. Yet we should exercise grace as serving God becomes unbearable when others become too critical of us.

2 Cor 10:8 So even if I boast somewhat freely about the authority the Lord gave us for building you up rather than tearing you down, I will not be ashamed of it. 9 I do not want to seem to be trying to frighten you with my letters. 10 For some say, “His letters are weighty and forceful, but in person he is unimpressive and his speaking amounts to nothing.”

Have confidence in your leaders and submit to their authority, because they keep watch over you as those who must give an account. Do this so that their work will be a joy, not a burden, for that would be of no benefit to you” (Hebrews 13:17).

Attacks by the devil

2 Cor 12:7 Therefore, in order to keep me from becoming conceited, I was given a thorn in my flesh, a messenger of Satan, to torment me. 8 Three times I pleaded with the Lord to take it away from me. 9 But he said to me, “My grace is sufficient for you, for my power is made perfect in weakness.” Therefore I will boast all the more gladly about my weaknesses, so that Christ’s power may rest on me.

The devil loves to attack God’s servants, especially those in leadership positions, as this will cause damage to the church. This well known “thorn in the flesh” of Paul was left intentionally vague I think so that everyone may relate to it. We all have our own “thorn in the flesh” and many times it won’t go away even with prayer. What is the thorn in the flesh you are facing? Could it be to remind you of your weakness as it was in the case of Paul? Personally, I have my thorn in the flesh as well, an illness that has plagued me from time to time. I too have pleaded to the Lord for healing but to no avail. Perhaps the thorn is to remind me of my human weakness, that I may not boast in my own strength but rely on God to do His work through me.

Having to make difficult and unpopular decisions

2 Cor 2:5 If anyone has caused grief, he has not so much grieved me as he has grieved all of you to some extent—not to put it too severely. 6 The punishment inflicted on him by the majority is sufficient.
In his previous letter Paul had asked the church to put out of fellowship a certain member who was sinning unrepentantly. God’s servants have to sometimes make difficult and unpopular decisions and may be criticized for those decisions. But we must not avoid them. Hearing from God how to move correctly in the decision is extremely important as the consequences are severe.

2 Cor 6:4 Rather, as servants of God we commend ourselves in every way: in great endurance; in troubles, hardships and distresses; 5 in beatings, imprisonments and riots; in hard work, sleepless nights and hunger;
Just as Paul persecuted the church before he became a believer, he went through tremendous persecution himself after he became one. Being God’s servant is never easy. Sometimes the hardship comes from facing Satan’s opposition to God’s work. Sometimes it could be God testing us and moulding our character before He can use us in a greater capacity. If we want to be used by God, we need to endure these hardships.

2 Cor 11:1 I hope you will put up with me in a little foolishness. Yes, please put up with me! 2 I am jealous for you with a godly jealousy. I promised you to one husband, to Christ, so that I might present you as a pure virgin to him. 3 But I am afraid that just as Eve was deceived by the serpent’s cunning, your minds may somehow be led astray from your sincere and pure devotion to Christ. 4 For if someone comes to you and preaches a Jesus other than the Jesus we preached, or if you receive a different spirit from the Spirit you received, or a different gospel from the one you accepted, you put up with it easily enough.

As God’s servants, while we try to impart God’s truth to those He placed in our care, the devil interferes with this by infiltrating with his lies. This problem is not new and it developed right from the time of the early church. We must not feel discouraged but neither must we let the devil have his way. We need to be diligent in informing our flock if they have swayed from the truth.
​