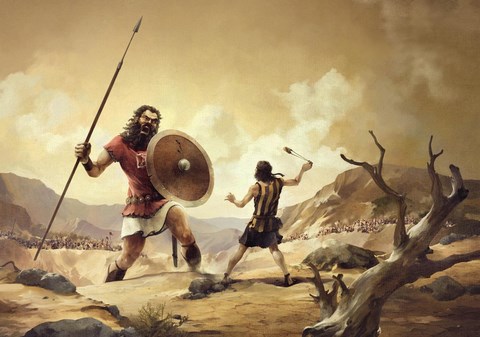 (1 Sam 17:4-8 NIV) A champion named Goliath, who was from Gath, came out of the Philistine camp. He was over nine feet tall. {5} He had a bronze helmet on his head and wore a coat of scale armor of bronze weighing five thousand shekels ; {6} on his legs he wore bronze greaves, and a bronze javelin was slung on his back. {7} His spear shaft was like a weaver’s rod, and its iron point weighed six hundred shekels. His shield bearer went ahead of him. {8} Goliath stood and shouted to the ranks of Israel, “Why do you come out and line up for battle? Am I not a Philistine, and are you not the servants of Saul? Choose a man and have him come down to me.

David had a real problem. He had to face a giant. We may not meet Goliath in person today but we encounter many similar giants in our life. Let’s learn from the famous story of David and Goliath how we can overcome the giants in our life.

Be clear of the motivation

Before we embark on any task, we need motivation. Without motivation, nothing is done. This is even more so for difficult tasks like overcoming giants in our life. How can we do it if we are not properly motivated.

David could overcome Goliath because he was motivated to do so. He asked what the reward was and was told that he could marry the king’s daughter and be exempt from tax. Nice reward! David was no doubt motivated by this. But he was motivated by another thing. He cannot stand to see anyone opposing his God.

What is the giant in your life that you want to overcome? You have to be sure what the reward is.

Recognize that your problem is no match for God

(1 Sam 17:26 NIV) Who is this uncircumcised Philistine that he should defy the armies of the living God?”

Acknowledge that your problem is no match for God. Tell God that you believe He is even bigger than our biggest problem.

Do not let others discourage you

(1 Sam 17:28 NIV) When Eliab, David’s oldest brother, heard him speaking with the men, he burned with anger at him and asked, “Why have you come down here? And with whom did you leave those few sheep in the desert? I know how conceited you are and how wicked your heart is; you came down only to watch the battle.”

Before David went to fight Goliath, he encountered obstacles from his own brothers. They tried to discourage him that he is not good enough. Later David was discouraged from King Saul himself.

(1 Sam 17:32-33 NIV) David said to Saul, “Let no one lose heart on account of this Philistine; your servant will go and fight him.” {33} Saul replied, “You are not able to go out against this Philistine and fight him; you are only a boy, and he has been a fighting man from his youth.”

If David were to succumb to these discouragement we would not have the story of David and Goliath. But he looked beyond all that.

Are you encountering ridicule and discouragement that prevent you from overcoming that giant in your life? Learn from David and look beyond all these discouragement.

Remember how God had helped you in the past

1 Sam 17:34But David persisted. “I have been taking care of my father’s sheep,” he said. “When a lion or a bear comes to steal a lamb from the flock, 35  I go after it with a club and take the lamb from its mouth. If the animal turns on me, I catch it by the jaw and club it to death. 36I have done this to both lions and bears, and I’ll do it to this pagan Philistine, too, for he has defied the armies of the living God! 37  The LORD who saved me from the claws of the lion and the bear will save me from this Philistine!”

David gained confidence from the fact that God had helped him in the past to deal with lions. Since God is unchangeable, there is no reason why God would not help him this time.

Recall how God had helped you to deal with difficult problems in the past. This is the same God who will help you in this current situation.

Let God overcome the giant for you

1 Sam 17:38Then Saul gave David his own armor-a bronze helmet and a coat of mail. 39David put it on, strapped the sword over it, and took a step or two to see what it was like, for he had never worn such things before. “I can’t go in these,” he protested. “I’m not used to them.” So he took them off again. 40He picked up five smooth stones from a stream and put them in his shepherd’s bag. Then, armed only with his shepherd’s staff and sling, he started across to fight Goliath….45  David shouted in reply, “You come to me with sword, spear, and javelin, but I come to you in the name of the LORD Almighty-the God of the armies of Israel, whom you have defied. 46  Today the LORD will conquer you, and I will kill you and cut off your head. And then I will give the dead bodies of your men to the birds and wild animals, and the whole world will know that there is a God in Israel! 47  And everyone will know that the LORD does not need weapons to rescue his people. It is his battle, not ours. The LORD will give you to us!”